From Old School RuneScape Wiki
Jump to navigation Jump to search
The RuneScape Wiki also has an article on: rsw:Statius's warhammer 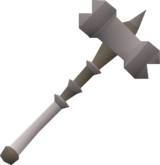 In Deadman seasonals, it is part of Statius's equipment, a set of Ancient Warriors' equipment, and is dropped by any monster found in the Wilderness as part of a global loot table, the chance being relative to the combat level of the monster.

Statius's warhammer has a special attack, Smash, that consumes 35% of the player's special attack energy and deals between 25% and 125% of the user's max hit, while lowering the target's current Defence level by 30% on a hit other than zero (the hit has to deal damage - even if it is a successful hit but rolls a zero, it does not work).