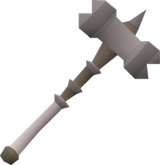 Statius's warhammer from Last Man Standing is a minigame-exclusive variant of the normal Vesta's longsword. It can be obtained from opening the chests with a bloodier key, or looting the crates that spawn at random locations on the map. It is dropped on death to whoever killed you.

Statius's warhammer has a special attack, Smash, that consumes 35% of the player's special attack energy and deals between 25% and 125% of the user's max hit, while lowering the target's current Defence level by 30% on a hit other than zero (the hit has to deal damage - even if it is a successful hit but rolls a zero, it does not work).