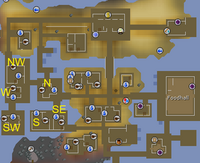 The locations of the houses Captain Khaled assigns you to steal from.

A lockpick or hair clip is required to steal artefacts (stolen pendant, stolen garnet ring, stolen circlet, stolen family heirloom, or stolen jewelry box) from drawers inside the assigned house and smuggle them out without attracting the attention of constantly moving patrolmen and patrolwomen. Players must travel back to Captain Khaled on foot because any teleportation removes the artefact. If players are caught with stolen goods, they will be relocated near the Kourend guards south-west of the general store without the artefact.

Logging out or teleporting with an artefact will require the player to report to Captain Khaled that the item is lost and a new task will be given.

Using guard lures (see below) and stamina or super energy potions, the following are average times on each path:

Paths in a single image.

The artefacts are located up the ladder in a drawer. For the south-western house, wait until the patrolwoman is walking away from you, then run to the spot in the first image.

If stealing an artefact at the northern house, wait until both the patrolman circling around the house and the patrolwoman north of the house are walking away from you before moving to the spot in the second image.

Increased experience rates are achieved by only using the south-eastern exit for the south-east house and the middle bridge for all other houses. This requires setting up with an artefact in the inventory to attract their attention, then getting close to the guard to move their vision line in a specific direction. Doing this may take several attempts to get the timing right. It may be necessary to walk onto the guard diagonally and from the back, rather than directly from the side or behind.

Note: Getting too close to a guard causes them to turn around and remove the player from the area. You'll need to acquire a new artefact and set up the guard again.

Note: Teleporting out to set up the lure requires getting a new artefact afterwards.

Note: Setting up the lures requires running, which moves 2 tiles in 1 tick. Running under from 2 tiles away will effectively teleport beneath him without time to alert before getting under.

Run under the guard to get his attention without being caught, and quickly teleport to a far away area, which will always force the guard to look to the south.

One example of using the middle bridge after the guard has been lured to look south, being sure to keep a 1 tile distance between you and the guard.

Walk under the guard to get his attention, then run back and climb the ladder to lose his attention, causing him to be stuck facing the pillar, then pass him while keeping a 1 tile distance.