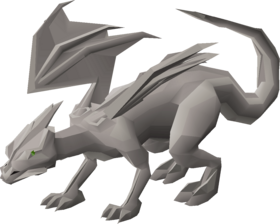 Steel dragons are powerful dragons found in the Brimhaven Dungeon and the Catacombs of Kourend. Steel dragons are the fourth strongest metallic dragons, behind mithril, adamant and rune dragons. They have a chance of dropping the draconic visage, which is the motivation of many steel dragon killers. Like their fellow metallic brethren, steel dragons can use long-range dragonfire in addition to using melee. The steel dragon boasts a higher max hit and accuracy compared to the iron dragon, although it is far weaker than a mithril dragon.

When given a task of steel dragons for Slayer, they can be an extremely hard and long task for unprepared players. The cheapest way for players to kill them are using bolt spells with chaos gauntlets to increase damage. Players can also use a slayer's staff (e) and Magic Dart. Alternatively, players can use ranged with an imbued slayer helmet to cover up lost accuracy against the dragon's high ranged defence. Higher levelled players can use the Zamorakian hasta or trident of the seas/swamp to kill steel dragons.

They drop rune items frequently and have an increased chance of dropping dragon platelegs and dragon plateskirts over their weaker metal counterparts (being the iron and bronze dragons). The runite limbs, axes and maces generate quite a nice sum of coins when high-alched to conserve inventory space.

Players can pick up the steel bars they drop to make profit, as they drop 5 at a time. However, this is unviable because players will need to bank after 4-5 kills which can hamper kill rates. Even with the completion of the Elite Karamja Diary, which notes their steel bars in the Brimhaven Dungeon, it is somewhat impractical here as they are surrounded by many iron dragons.

If they are fought without complete dragonfire protection, it is recommended to stay in melee range and use Protect from Melee, to reduce the amount of dragonfire damage taken.

One Steel dragon is fought during Dragon Slayer II.