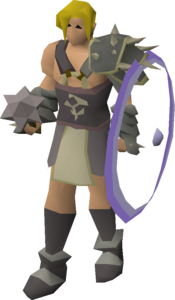 Steve is a warrior aspiring to become a Slayer master located by the steps in the upper level of the Skeletal Wyvern area in the Asgarnian Ice Dungeon. If players attempt to attack the skeletal wyverns in the upper area, he will stop them from doing so, claiming the upper area is only for those who have skeletal wyverns as a Slayer assignment. He wields a steel mace, an elemental shield, and a set of Bandos armour.

He is the father of Weve, younger brother of Hieve and Nieve's little cousin, who is the Slayer master next to the entrance of the Stronghold Slayer Cave. He believes that Slayer masters, and thus Nieve, have nothing special about them, because all they do is "tell people to kill stuff."

Through speaking to him, it is clear he is envious of his cousin, due to her having a large cavern where she can "boss people around" (referencing to what happens if players attack a monster within the cave that they're not assigned to kill). Because of this, he decided to carve some steps in the skeletal wyvern area in the Asgarnian Ice Dungeon and claimed the upper area as his own.

During the events Monkey Madness II, when the player recruits Nieve to defend the Tree Gnome Stronghold from Glough's attack, Steve leaves his post to temporarily replace Nieve as the slayer master. Following her death by Glough, he replaces her as a full-time slayer master, and has his steel mace replaced by a zamorakian hasta. His little sister, Pieve, watches over the extra skeletal wyverns. Talking to him about Nieve's death will result in somewhat humorous dialogue where he was hoping to have a shield like hers when he took the job.

Steve is the solution to the medium anagram clue: VESTE The answer to his challenge question: How many farming patches are there in Gnome stronghold? is 2.

Players can receive Slayer reward points for completing Slayer assignments—this is based on how many tasks players have accomplished in a row. Completion of a task assigned by Steve will grant you a varying amount of points, depending if players have completed the Western Provinces Diary, which is increased to match those of Duradel.

Unlocking abilities to increase your task numbers for certain Slayer monsters can be done by spending Slayer reward points from any Slayer master.