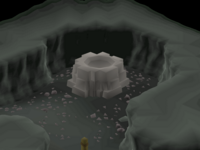 A plinth in the Daeyalt essence mine, which once held the mythical Stone of Jas.

The Stone of Jas is a legendary artefact created and left behind by the god Jas. According to Melzar, it was used by the gods to create all life and magic.[1] However, it has not been seen for centuries. The Stone appears to have peculiar creative properties, altering nearby material when left undisturbed over long periods. Like the Staff of Armadyl, it is coveted by mortals and gods alike for its immense power.

The Dragonkin operate as a defense mechanism for the Stone; they are cursed, magically bound to the stone by Jas. The curse causes an uncontrollable rage to burn within them whenever the power of the stone is falsely used. This rage can only be sated by a rampage against the perpetrators. Fittingly, half of the Dragonkin emblem is the Stone of Jas, the other half being a compass rose.

The Stone, lying dormant within what would become the Rune essence mine, was responsible for its creation, as it altered the ordinary stone within, turning it into the rune essence. The Stone (along with the rune essence) was discovered by the Fremennik hero V, who ascended to godhood and gained a wealth of knowledge upon exposure to it. Upon discovery, it was immediately removed by higher powers, but the encounter gave V the knowledge and power required to create the Astral altar and, subsequently, the other Runecraft altars. It is unknown whether the Dragonkin retaliated against V for this usage, but it seems he was able to remain on Gielinor unharmed for a considerable length of time.

When the gods Zamorak and Saradomin used the Stone at the end of the God Wars, laying waste to Forinthry and creating the Wilderness in the process, the Dragonkin, unable to locate and target the false users (possibly because the gods had been banished), turned instead to wanton destruction of human settlements to quell their rage. This marked the beginning of the Dragonkin Conflicts of the early Fourth Age.

At one point in time, the Stone was hidden in the Daeyalt essence mine beneath present-day Darkmeyer and Meiyerditch. Its presence altered the nearby ore, creating daeyalt and daeyalt essence. The current location of the Stone of Jas is unknown, but it is suspected to have been in the possession of either Lowerniel Drakan or Efaritay Hallow at some point, most likely hidden in the mines, where the plinth is found. During Sins of the Father, Drakan's sister, Vanescula Drakan, ridicules Drakan: "You have been gone too long, brother. While you spend your days hidden away, lamenting about that stupid rock, our kind suffer." This indicates that either the Stone changed locations before Drakan was able to use it, or he is somehow unable to harness its power.