From Old School RuneScape Wiki
Jump to navigation Jump to search
This article is about the machines found on Fossil Island. For the orb used in Treasure Trails, see Strange device.
Strange Machine? (edit) 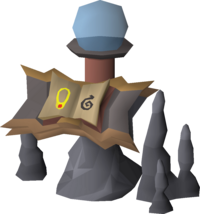 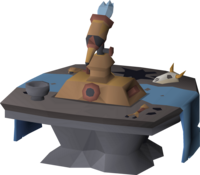 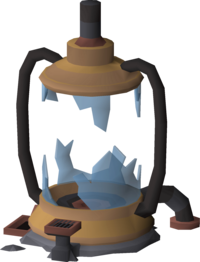 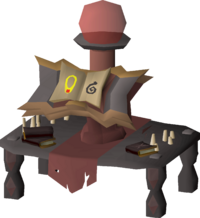 The Strange Machines of Fossil Island are several objects players can interact with by using certain items on them. The House on the Hill features three of these four machine, and the Lithkren Vault features the fourth one, which serves as another variant of the digsite pendant machine.

The southernmost machine in the House on the Hill can be used to upgrade the digsite pendant. By using the pendant on the Strange Machine, players will unlock a teleport to the House on the Hill, which allows them to easily access the Mycelium Transportation System on the island.

In the eastern machine in the House on the Hill, players can place enriched bones to activate it, granting Prayer experience. The enriched bones can be created in the mycelium pool by combining fossils with pyrophosphite and calcite.

The northernmost machine in the House on the Hill can be used to create a wyvern shield by placing a wyvern visage and an elemental shield on it while holding a hammer in the inventory. This requires both

Finally, the machine in the Lithkren Vault can be used in a similar way to the southernmost machine mentioned earlier. Players can use a digsite pendant on it to unlock a teleport to the Lithkren Vault, which gives them easy access to the hydra leather machinery, as well as adamant and rune dragons.