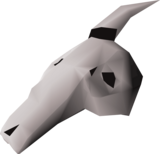 The Strange skull is an item that players can use with a runed sceptre to make a skull sceptre. It appears to be half an animal skull attached to half a human skull.

The skull sceptre, when formed from its 4 components, teleports the user to the mines in Barbarian Village, just above the Stronghold of Security. A new sceptre may be formed by combining the right skull half, left skull half, bottom of sceptre, and top of sceptre. Only one skull sceptre may be created at one time, but a player may own as many strange skulls, runed sceptres, skull halves and sceptre halves as one wishes.

Skull sceptre pieces can be crushed with a chisel to yield Bone fragments, or combined to a Skull sceptre (i) to add to its current charges. When chiseled, the strange skull will provide a base quantity of eight bone fragments, increasing by two for each Varrock diary tier the player has completed.