The Strategy table is found in Verzik Vitur treasure vault at the end of the Theatre of Blood, and can only be interacted with by the participants. Reading the table will open an interface containing details about the players' performance in the theatre. The interface contains information about the number of times each player died, the time spent in each room, and who the Most Valuable Player (MVP) was. The War table found in the same room and performs the same function as the war table, but can be only be interacted with by spectators. 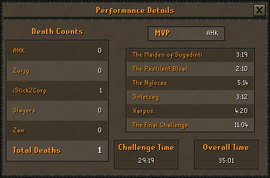 Performance Details for a performance within the Theatre of Blood.
Retrieved from ‘https://oldschool.runescape.wiki/w/Strategy_table?oldid=14237552’
Categories:
Hidden category: