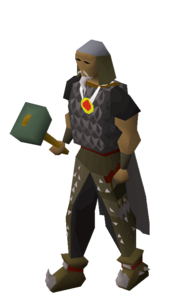 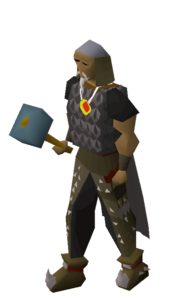 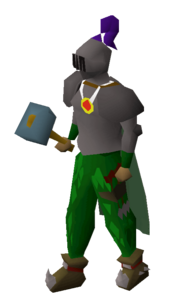 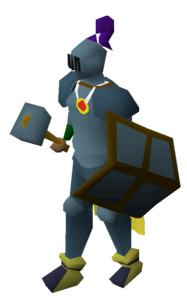 A strength pure is a type of low level free-to-play combat pure account that focuses on training strength without training attack. This build is considered to be a free-to-play equivalent of the obsidian pure.

At the cost of the accuracy of their attacks and the variety of available weapons, high strength levels allow these pures to achieve higher maximum melee hits than those of other melee-based builds in their respective combat ranges. Strength pures typically use 3-tick melee weapons such as the event rpg to wear the opponents down and warhammers to knock them out. Since warhammers offer considerable strength and accuracy bonuses without any attack level requirements, they are excellent knockout weapons for this particular build. They might also use shortbows for their accuracy and ability to set up combos, but there is a limit of how high they can train ranged without affecting their build.

Due to their powerful knockout attacks, strength pures are a very strong build in low combat level brackets. Early on, the 1 defence pures that train attack up to 40 achieve much smaller maximum melee hits, even with access to stronger weapons such as the rune 2h sword. However, due to their low accuracy, strength pures are less effective in higher combat level brackets where their maximum hit advantage is not as drastic, and opponents with higher defence levels are more common.

ranged to gain access to an accurate secondary attack with consistent damage output. 40 ranged level also allows to wear green d'hide armour with notable defensive bonuses. However, it must be noted that overusing this combat style might lead to a ranged-based combat level. With 1 attack and 99 strength, ranged can be trained only up to 67 level without affecting the overall combat level.

magic can be trained to the same level as ranged, or roughly ⅔ of the sum of attack and strength, without affecting the overall combat level. To minimise hitpoints experience, magic should be trained with methods such as splashing, curses, teleporting, enchanting jewellery and alchemy.

Some strength pures choose to train

attack to levels such as 5, 10, or 20 to improve the melee accuracy. This also allows them to train skills such as ranged to a higher level. See the variants section for a detailed comparison.

Strength tanks are a variant of strength pures that additionally train

defence, usually up to 30 or 40 level to be able to wear adamant armour or rune armour respectively. With access to the strength bonus of the gold decorative boots unlocked at level 30, they can increase the maximum melee hit of rune warhammers up to 30.

In PvP combat, strength pures often rely on quick 3-tick melee weapons such as event rpg to wear the opponents down. Knockout attacks are performed with the best available warhammer. Currently, rune warhammer is the best free-to-play strength-based weapon requiring 40 strength level to wield. Many pures also choose to bring maple shortbow with adamant arrows as the main weapon, but it should be noted that overusing ranged attacks can lead to having a ranged-based combat level and relatively underpowered maximum melee hits within the respective combat level range.

Especially on lower combat levels, coif and iron chainbody might be preferred over iron full helm and iron platebody for their higher crush defences against other strength pures. Similarly, leather gloves might be better than leather vambraces due to their slightly higher crush defence bonus, but keep in mind that they lack the ranged accuracy bonus. In practice, leather boots are used instead of the fighting boots or fancy boots most of the time despite inferior bonuses, since they do not have to be reclaimed after death.

These pures often do not carry a shield, since it cannot be used along with the 2-handed event rpg or maple shortbow. However, using a shield is more convenient when relying on a 1-handed 3-tick weapon such as the swift blade or ham joint.

Due to their low attack, these pures might bring both amulet of power and amulet of strength to boost the accuracy of their regular attacks with the 3-tick weapon and the maximum hit of the knockout attacks respectively, or consider using only amulet of power altogether.

Strength tanks, or accounts that train defence in addition to strength, should use the best available metal armour. This will usually be adamant at 30 defence level or rune with at least 40 defence level. Gold decorative boots are also recommended as they can improve the maximum melee hit thanks to their strength bonus, but keep in mind that they will be lost upon death beyond the 20 level of the wilderness.

In contrary to the event rpg, both swift blade and ham joint are 1-handed weapons that can be wielded with a shield. Swift blade is also the only free-to-play 3-tick melee weapon that allows to use aggressive stab and slash attack styles. However, due to their high prices, they might not be preferrable in non-safe 1-vs-1 combat.

Strength pures either do not train attack at all, or stop training attack at a very low level to slightly improve the accuracy of their attacks. Since most of their combat experience comes from a single melee skill, their hitpoints level is often higher than in case of other 1 defence pures with comparable combat levels — unless their strength skill was trained with members-only methods that do not grant any hitpoints experience.

Training such accounts on NPCs often takes much longer than in case of typical 1 defence builds due to the lack of training gear progression and their low accuracy. Methods involving alts or killing defenceless NPCs such as seagulls will yield the best experience gain rates. Make sure to compare the damage-per-second rates between a 3-tick melee weapon such as event rpg, ham joint or swift blade and the best available warhammer, and set the combat style to aggressive before training.

Magic can be trained to gain access to the utility spells such as teleports and increase the magic defence. Ranged should be trained up to 20 or 40 to gain access to the studded and green d'hide armours respectively. Ranged also works pretty well as a secondary combat style thanks to its accurate and consistent attacks that are easier to combo with.

Strength pures use quick melees attack to wear the opponents down. In typical 1-vs-1 duels, this would be the event rpg due to its low price and unique movement stall. Knockout attacks are performed with warhammers due to their considerable strength bonuses and no attack requirements.

Ranged attacks with weapons such as maple shortbow with adamant arrows can also be used instead of a 3-tick melee weapon due to their higher accuracy and overall damage output. However, overusing ranged attacks can make the combat level ranged-based and force the players to train strength to optimise the damage output within their combat level range. Also, even with 99 strength, the ranged skill can be trained only up to about 67 level without affecting the overall combat level.

Movement stall of the event rpg can be leveraged to deliver unexpected combos. Techniques such as dodging, fake eats, delaying, backstepping and sliding can improve the chances of a successful KO.

The Protect Item might also be acceptable in 1-vs-1 combat early on to protect valuable items such as the rune warhammer, especially in fights where the opponents do not carry items of comparable worth such as rune weapons, which can be quite common in the low combat level brackets.

Some strength pures choose to train attack to increase the accuracy of melee attacks. This is especially relevant on higher combat levels where builds with defence are more common, or when training ranged and magic past 67 level.

Some viable attack levels include:

Accuracy gets progressively worse against opponents with higher defence levels, making it difficult for strength pures to face opponents with builds such as adamant pure or rune pure.

For comparison, 40 attack pures reach accuracy of 87.37%—94.19% with a rune scimitar and 89.65%—95.19% with a rune 2h sword against a 1 defence opponent. To see a guide for accounts with a higher attack level, see the melee pure and the ranged-melee pure articles.

Instead of relying on 3-tick melee weapons, maple shortbow with adamant arrows can be used to deal most of the damage due to its high accuracy and consistent damage output. See the ranged-melee pure for more details on this particular combat style. Keep in mind that there is a limit on how high the ranged skill can be trained without increasing the combat level, which means that non-ironmen strength pures cannot indefinitely use ranged attacks in player-versus-player combat without affecting their build.

To find the optimal ranged level of a strength pure, check the ranged level corresponding to the sum of the account's attack and strength levels in the table above. Note that these values can also be used for optimal magic levels, since both ranged and magic have similar effects on the combat level.

Strength tanks are variants of the strength pures that additionally train the defence skill, usually up to 30 or 40 level. This unlocks adamant armour or rune armour respectively, in addition to the gold decorative boots, which are necessary to maximise the equipment strength bonus and the damage with rune warhammers. Since these accounts save quite a bit combat levels by neglecting attack, strength tanks can remain competitive against classic 1 defence pures on a similar combat level.

Strength pures with low hitpoints levels can be used for rushing. With the Ironman Mode, these accounts do not earn any experience in melee and ranged skills through player-versus-player combat, which allows them to stay at extremely low hitpoints levels. With 10 hitpoints and 40 strength, these pures can wield the rune warhammer and deal as much as 12 damage with a single blow on 16 combat level. Not only does it allow them to attack opponents with 3 combat level within the PvP worlds, but also kill the majority of low level accounts with one hit or a single combo.

Strength pures can be easily converted into most other builds involving melee combat. In particular, training attack to 40 level allows to convert them into melee pures, while the ranged-melee pure can be a natural progression for the build once ranged level is trained too high to balance the combat level with strength alone.