The Stronghold Slayer Cave, also known as the Stronghold Slayer Dungeon, is a dungeon located beneath the Tree Gnome Stronghold. It contains a small variety of monsters that are commonly assigned to players. The cave entrance is located next to Nieve (or Steve, after the events of Monkey Madness II).

Anyone can enter the dungeon, but players can only attack the slayer monster they were assigned, and only while the task has not been completed. The Slayer ring can teleport players to the entrance of the cave. A dwarf multicannon can be used in the dungeon.

There is a shortcut in the dungeon requiring 72 Agility (can be boosted) to use. This allows the player to reach aberrant spectres and ankous quicker. It may be used to exit the dungeon faster, but doing so without the required Agility level deals up to 12 damage. 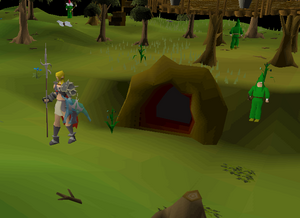 The cave's entrance is found next to Nieve.

Monsters that can be found in the Stronghold Slayer Cave include:

A slayer dungeon containing a large variety of monsters where players can only attack their assigned slayer target was proposed in the Slayer & Christmas Dev Blog on 15 November 2013. The dungeon was polled in Content Poll #13 and passed by 86.6%. 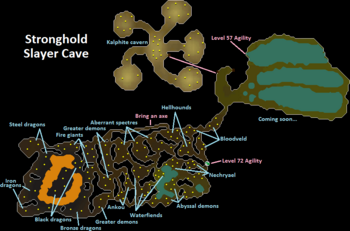 A map of the Stronghold Slayer Cave upon release.

The cave was released on 23 January 2014, where it housed many common slayer monsters such as metal dragons, abyssal demons, and kalphites. However, the cave kraken lake was empty, as development of the slayer monster was not yet complete. This was added in an update a week later. The cave would go on to receive several more additions:

Eventually, players began to voice concerns on the sheer amount of slayer assignments that they found themselves doing in the Stronghold Slayer Cave, due to its close proximity to a bank and convenient location, taking away the appeal of the variety the Slayer skill offers, the monotony of grinding in the same location, and the lack of exploring the game world as players train.

Players also complained that many of the monsters found there do not appear to be native to the area. In addition, the geography of the cave wildly varied, with damp caves on the east and lava lakes a small walk west, breaking the sense of immersion. Additional concerns included the excessively large size of the cave, which was large enough to fit Falador, Varrock, and everything between them.

In response, the Old School team wrote a Developer Blog, aiming to bring back the variety and diversity of where players train Slayer by moving some creatures out of the Stronghold Slayer Cave, and placing them into a number other new dungeons where appropriate (still requiring the appropriate slayer assignment to attack them). The cave's splitting was polled in Content Poll #51 and passed by 89.6%. 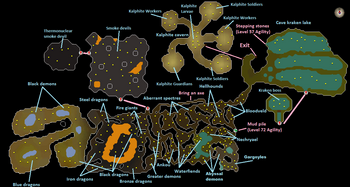 A map of the Stronghold Slayer Cave before the update that split it.

As a result, the cave was completely remapped on 27 April 2017, leaving only bloodvelds, hellhounds, aberrant spectres, ankou, and fire giants behind. The cave became nearly one-fifth its original size, with the following new areas introduced with monsters relocated to them: