The Stronghold of Security is a dungeon found in Barbarian Village, just west of Varrock. The dungeon includes four different levels filled with aggressive monsters from levels 5 to 159. The dungeon was created to enhance the security of players by filling out security question in their account management, and answer questions that relate to account security. A cannon can be placed in the stronghold.

The doors are named and styled to match the current floor you are on. Between each set of doors is an empty space within which no monsters can harm you. On entering the second door in a pair of doors, you will be prompted with a question related to account security. There are also portals leading to the reward room at the beginning of the floor, but can only be used once the reward on that floor has been claimed or if your Combat level is high enough.

There are four levels, which become progressively harder than the previous floor. At the end of every level, a reward room provides a one-time reward of coins and unique emotes. It is possible for an unarmed level 3 to complete the Stronghold, but decent food is recommended for the more challenging floors.

Note: Before being allowed to claim rewards, you must have a RuneScape Authenticator on your account via the account management page.

The first level is occupied by level 1 rats, level 5/11/13/16/25 goblins, level 11 and 14 wolves, and level 12 and 27 minotaurs, which drop the right skull half for the skull sceptre. The level contains ranging safespots making it popular for new players to gain combat experience in ranged or magic. The last room contains the Gift of Peace, which rewards you with 2,000 coins and the "Flap" emote.

The second level is occupied by level 26 giant rats, level 30/44/53 zombies, and level 28/35/41 flesh crawlers, which drop the bottom of sceptre for the skull sceptre. Killing flesh crawlers is a popular money making method for low levels due to frequent valuable herb drops. The last room contains the Grain of Plenty, which rewards you with 3,000 coins and the "Slap Head" emote.

The third level is occupied by level 24 spiders, level 50 giant spiders, level 37 and 59 scorpions, and level 49/64/68 catablepon, which drop the top of sceptre for the skull sceptre. The giant spiders are very popular to train as they are aggressive towards any level and do little damage. The last room contains the Box of Health, which rewards you with 5,000 coins and the "Idea" emote. The chest also provides a full stat restore when opened.

The fourth and final level is occupied by level 159 shades, a single level 159 zombie, level 60/68/85 skeletons, level 76 and 77 ghosts, and level 75/82/86 ankou, which drop the left skull half for the skull sceptre. The final room contains the Cradle of Life, which rewards you with the "Stamp" emote and your choice of either the fancy boots or the fighting boots. 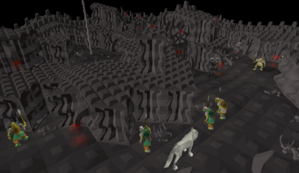 The Gift of Peace.

For completing the Stronghold of Security, you are provided a one-time reward of 10,000 coins as well as four unique Emotes, and your choice of either a pair of fighting boots, or a pair of fancy boots. If you lose the boots or decide to switch the pair you own, it is possible to return to the Cradle of Life to obtain the pair you desire.

Completing each level of the Stronghold of Security allows you to use the portals found at the beginning of each level. The portals teleport the individual directly to the reward room of the respective floor. Full completion of the stronghold also makes it possible to skip the question to pass the doors. Each level also has a music track you can unlock:

Another possible reward from the Stronghold of Security is the Skull sceptre, which teleports you to the entrance of the stronghold in Barbarian Village. In order to craft the skull sceptre, players must first obtain four untradeable pieces dropped within the stronghold.

The boots obtained from the Cradle of Life and the complete sceptre can be shown to Solztun, found in the reward room on the last level of the stronghold, for him to imbue the sceptre. Once imbued, the sceptre will not break when the charges are consumed and can be recharged using the pieces required to create the sceptre, providing three charges each. The sceptre normally can hold five charges but can be upgraded to hold seven, nine and eleven after completing the easy, medium, and hard Varrock achievement diaries, respectively.

Warning: should players disable the Authenticator, the skull sceptre will revert back to its regular state.