Sulliusceps are a type of mushroom found in the Tar Swamp on Fossil Island. Chopping sulliusceps requires level 65 in Woodcutting to chop, and grants the player 127 experience per yield.

Players can receive mushrooms and mort myre fungus from chopping sulliusceps, and can also receive a sulliuscep cap at a rate of 1/100, which is used in creating mushroom pies. In addition, they also yield numulite and unidentified fossils fairly commonly, making chopping sulliusceps one of the fastest ways to obtain fossils for Kudos.

Sulliusceps have a 1/16 chance per successful chop to deplete. 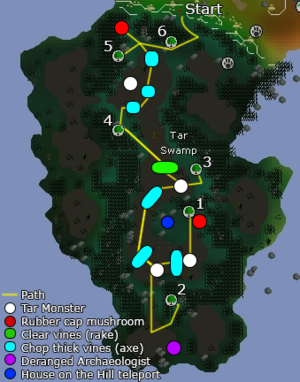 The strategy method for cutting sulliusceps.

There are six sulliusceps found throughout the Tar Swamp, indicated by the

icon, but only one is large enough to be chopped down at any given time, while all other locations will have sulliuscep sprouts in their location. Players must traverse the Tar Swamp to find the choppable sulliuscep, the location of which is unique to each player, so world switching will not change its location. Once chopped, the next sulliuscep will spawn, the location of which cycles through the same sequence over and over and is shown in the picture above.

To get to the first one, player can use either Magic Mushtree or rubber cap mushroom. The rubber cap mushroom is NOT recommended unless you have filled the mud pit with 9 bittercap mushrooms at the landing site. If you take the rubber cap without a mushy bed to land on you can sustain high damage. Hits up to 50 are not uncommon.

Travelling through the swamp will require a rake to clear vines in addition to an axe. The swamp is home to dangerous Tar Monsters, which deal typeless damage, and poisonous spine mushrooms, so bringing some form of recovery and cure to poison is recommended but not necessary. When several players run through the swamp at the same time, Tar Monsters tend to stay around instead of despawning, resulting in more successful attacks on player. Therefore, it is advised to find a world without players in the area.

Should the sulliuscep spawn in an undesirable area, players can kill the sulliuscep instantly by using the right-click "Inject" option, which requires 1 proboscis and 1 fungicide spray. This forces the sulliuscep to revert back to its unchoppable sprout state (the same as if the sulliuscep was felled) and to spawn in the next location.

Although player can do quick runs while dropping every obtained type of mushroom, if one wants to utilize mort myre fungus, bringing druid pouch is a good choice.