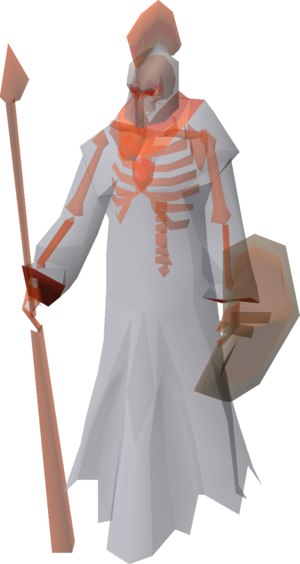 Summoned Souls are summoned from the River of Souls during the fight with Cerberus, indicated by it howling Aaarrrooooooo. The souls' colour and equipped weapon coordinates to their attack style: red/spear is melee, green/bow is range, and blue/staff is magic.

The order in which they appear is randomised, but they always attack from west to east. Thus, players can predict the order of attack the souls will do, and prayer flick as they attack to mitigate their damage. If an incorrect overhead prayer is used when they attack, they will always deal 30 damage regardless of the player's defensive bonuses. Tick eating does not work against the attack.

If the player uses the correct overhead prayer just before they attack, they will drain 30 prayer points instead. This can be taxing on players without 90+ Prayer, as they will always be completely drained of prayer after the third spirit attacks. The prayer drain can be cut by half (to 15 points) by wielding a spectral spirit shield when they attack.

Once all three finish their attack, they return to the River of Souls, wailing quotes such as "Join us.", "I obey.", and "Steal your soul." They will stay there and despawn after a short time unless they are called before they do so.