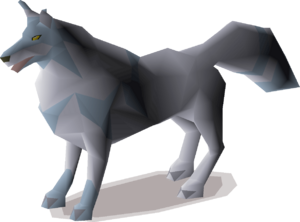 The spirit wolf, a Summoning familiar.

Summoning was initially conceived early in the days of RuneScape Classic as an expansion to the magic skill. Three summoning spells were ultimately conceived: "Call animal", "Raise skeleton", and "Summon demon", all of which would have made use of a new type of runestone, the Life-Rune. While the summoning spells were never released in RuneScape Classic, players still discovered the existence of the unobtainable life rune. The idea of Summoning was revisited after the release of RuneScape 2, and summoning spells that would let you "summon skeletons, demons, etc...!" were mentioned in the upcoming RuneScape updates newspost that released a couple of days after RuneScape 2 launched. With the magic skill already receiving a large expansion with the release of Desert Treasure I and Ancient Magicks, the idea of Summoning as an expansion to magic was subsequently abandoned in favour of making it a full-fledged skill. The first design brief for Summoning was written in early 2005 by Mod Bennett after he finished development of the Slayer skill, but it was rejected due to not fitting with the rest of the game and not having a broad enough appeal.[2] 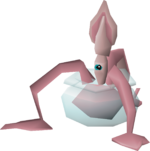 Design for Summoning was put on hold for a few months until Jagex moved to a larger office in mid-2005, and then rethought. It was subsequently renamed Animal Lore, with the idea of it being connected to the Hunter skill, with players catching animals with Hunter and then training them to aid them in more than just combat. Jagex also came up with new ideas for how the skill would work mechanically, such as the animals working similarly to the existing cat pets, with players levelling up the skill by having one following them as they went about their business. In late 2005, Mod Wilson created an early prototype of a new pet while developing the Rum Deal quest - the Karamthulhu. However, it was decided to hold it back so it could be released as a Summoning creature. Nevertheless, the follower NPC was added to the live game, although impossible to encounter under normal circumstances.[3] However, subsequent testing revealed that expecting so many players to have followers at once was not technically viable, so work on the skill was again put on hold. 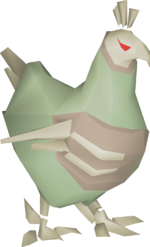 In mid-2006, after development on the Construction skill was finished, design on the Animal Lore skill once again restarted, and as Mod Bennett had moved to another team, the task of writing a new design brief was given to Mod Wilson. After being refined to incorporate more elements of Mod Bennett's original design, the skill was renamed back to Summoning, and the final version of the design brief was signed off in September 2006. An early version of the gecko pet's chathead was added to the game files in September, with the animations for it used by the graphically updated mounted King Black Dragon heads, the gecko's full body would later make its way into the files with the release of the Hunter skill in August. Full-fledged development of Summoning began shortly after the release of Hunter, and would continue for the remainder of 2006 and the entirety of 2007. The first prototype summoning familiar created was an undead chicken, reusing code from pet cats and the zombies from the 2005 Halloween event, the models and animations of this prototype familiar were shared with the in-development Animal Magnetism quest, which was released in December 2006.[4] After this, work on the final summoning familiars and pets began, and some of the assets related to them would sometimes accidentally make their way into the game files throughout 2007.

In January 2007, the Cold War quest was released, and models for the penguin pet and an early version for the arctic bear familiar were added to the game files alongside it. With the graphical update to cows and yaks in March, an early model for the pack yak familiar was added to the files, and the May update to spiders, scorpions, kalphites and metal dragons saw the chatheads of the bull ant and spirit kalphite familiars added. The June update to dogs saw the graphically updated werewolves making use of the spirit wolf's chathead animations, while the 9 July bird graphical update saw the addition of summoning bird chathead animations, used by parrots such as Cracked Jenny's Tea Cup. The release of the Surprise Exam random event on 17 July saw the summoning gecko chathead animations updated and used by Mr. Mordaut, and with the release of the King's Ransom quest and the Chivalry and Piety prayers on 24 July, the icon for the Protect from Summoning prayer was accidentally added to the game files alongside them. 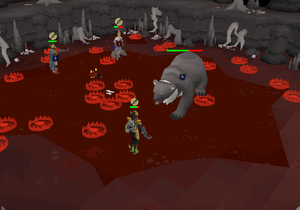 Summoning was released on 15 January 2008, five months after the version of the game recovered from the August 2007 archive Old School RuneScape was created from, and as a result, it is not present in Old School RuneScape. The archive also contained unfinished versions of some of the content in development at the time, including Summoning, which had models and animations for some NPCs in varying states of completion, item models, and combat code.[1] While content that was closer to release such as the God Wars Dungeon and Ourania Altar were subsequently added to Old School RuneScape after passing a poll, Summoning was far less complete, being five months earlier in development than when it initially released, not accounting for the significant amount of rebalancing it received post-release.

While there are no known plans to add Summoning to Old School RuneScape, in June 2021, resurrection spells were added to the Arceuus spellbook, which allow players to summon creatures to fight for them, in a similar fashion to the summoning spells originally conceived for RuneScape Classic over twenty years earlier. The three resurrect skeleton spells even allow players to fight alongside a skeleton, as the original raise skeleton spell would have allowed.