From Old School RuneScape Wiki
(Redirected from Superior)
Jump to: navigation, search
The RuneScape Wiki also has an article on: rsw:Elite monster 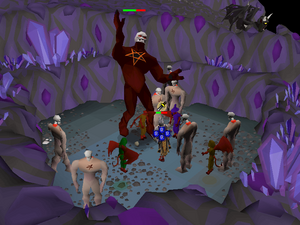 A player fighting a Nechryarch within the Catacombs of Kourend.

Superior slayer monsters are more powerful versions of normal slayer monsters that have a 1/200[1] chance to spawn upon the death of one of its normal counterparts, provided the death of the normal monster occurs in a location that can fit the superior creature.[2] This latter condition is only relevant for superior creatures that are larger than their normal counterparts. They can be encountered after purchasing the unlock Bigger and Badder for 150 Slayer reward points from any Slayer master, and will only occur while on a Slayer task. This can be toggled on and off afterwards without loss of points.

In addition, once one has appeared, another one will not spawn for that player until it is killed or despawns. In single combat areas, a superior slayer monster can be attacked even if you are under attack by another monster; when this happens, the standard monster will stop attacking you. In multicombat areas, it is possible for multiple superior slayer monsters to appear simultaneously if multiple monsters are killed at the same time.

The first UDT contains the imbued heart, dust battlestaff and mist battlstaff. The second UDT contains only the eternal gem.

Thus, the formula of receiving any unique drop is

The formula of receiving an imbued heart or eternal gem is

And the formula of receiving a dust or mist battlestaff is

There are superior versions of the following monsters: