From Old School RuneScape Wiki
Jump to: navigation, search
For a list of all items and upgrades within the Construction skill, see Construction/Level up table.
Superior garden 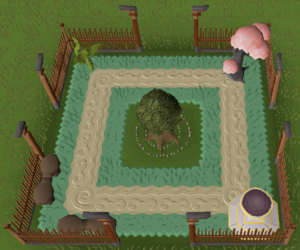 A superior garden is a room in player-owned house that can be built at level 65 Construction with 75,000.

Players can have multiple superior gardens in their house, and when using the spirit tree or fairy rings, the player will be teleported to the first garden they have built.

For planting, the player needs to be holding a watering can (with water) in the player's inventory.

Pools are constructed in upgrades: before a higher level pool can be built, the player must first build the one before it. The pool space will restore certain stats, depending on the type of pool built.

The teleport space allows players to plant a fairy ring (code diq), spirit tree, or obelisk, allowing quick transportation, provided they have completed the quests required to use them.

Note: In contrast to other hotspots, the natural teleport is not built with a saw, so the crystal saw boost does not apply, although the crystal saw may still be used to construct the obelisk.

Players can have the topiaries sculpted into various boss heads with a pair of secateurs or magic secateurs, provided they have killed the boss at least once.

The marble and obsidian benches are purely decorative and cannot be sat on due to rendering issues caused by the game engine.