Suqah are a race of strange-looking but powerful creatures native to Lunar Isle. Players must have at least started Lunar Diplomacy to have access to Lunar Isle. Despite their fearsome nature, they have a peaceful relationship with the Moon Clan, but are aggressive to outsiders, effectively serving as guards.

The Suqah on the northern part of the island attack with magic, using weak versions of Ice Barrage and Water Wave, in addition to melee. When they successfully cast Ice Barrage and the player is not using Protect from Magic, it is guaranteed to hit 10 damage. It is recommended to use Protect from Magic and gear with high melee defences, as well as bringing some food, when fighting these Suqahs.

Suqah are also located on the southern part of the island, albeit more sparsely. These do not attack with magic, therefore making it a good spot for players assigned Suqah as a slayer task that do not wish to use the Protect from Magic prayer; their damage can be mitigated entirely with Protect from Melee. There is a safespot next to the tree closest to the Oneiromancer, and standing on the bridge will also work. A Seal of passage is required to use the bank located on the Lunar Isle if the player has not completed the Dream Mentor quest. This quest allows you to bank at 'Birds-Eye' Jack in the Lunar Isle bank. 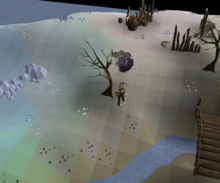 Drop rates estimated based on 16,487,910 kills from the Drop Rate Project, unless otherwise cited.

There is a 5/129 chance of rolling the gem drop table.