The Swamp Boaty is a seemingly deserted rowboat found at the world map point marked "The Hollows", in Mort Myre Swamp. After the Nature Spirit quest, it provides a free ride to the town of Mort'ton. After In Search of the Myreque, the reverse trip may be made (In exchange for 10 coins). It is one of the quickest methods to get to Burgh de Rott. Riding it at The Hollows is required for the Medium Morytania Diary.

The quickest way to get to the boat is to travel to the nearby fairy ring using code BKR. Once there, players should head south-east. An alternative but slower method is to go though the Canifis cellar, exit the large doors at the end, and head south across the bridge. 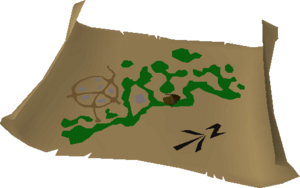