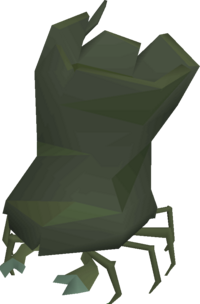 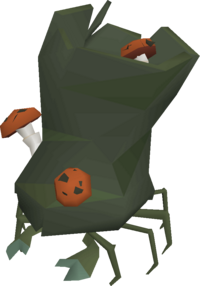 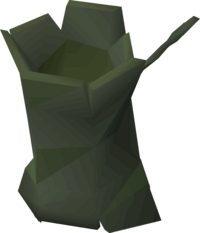 Swamp Crabs are aggressive monsters that disguise themselves as harmless swampy logs. When a player approaches them, they will attack in a fashion that is identical to Rock Crabs. They are found in the southern and southeastern part of the Haunted Woods directly south of Port Phasmatys and towards the path leading to Slepe.

The Swamp Crabs will become unaggressive after a while, and can then only be examined as a Swampy log, giving the message "A bit of decaying wood". They will become aggressive again after walking back into Port Phasmatys a small distance.

If a player casts bloom while fighting a Swamp Crab, then its "shell" will grow three mort myre fungi, which will be dropped once it is killed. A good tactic to obtain additional fungi is to lure a Swamp Crab next to a Rotting log, which will also have a chance of spawning a fungi after casting bloom.

Because of their excellent defence against Melee and Magic, it is strongly recommended to use Ranged when killing Swamp Crabs.

Drop rates estimated based on 266,368 kills from the Drop Rate Project, unless otherwise cited.