Tackle organised crime is a minigame in which players help the Shayzien soldiers raid gang meetings in order to keep order in Great Kourend. In order to help take out gangsters, players must have 40% Shayzien favour.

Players can find out where gang meetings are about to take place by talking to Captain Ginea in the tent just south-east of the bank chest, marked with the

map icon. Every 30 minutes, the noticeboard will give out the location of a gang meeting. After reading the notice, players are prompted to take a note to remind players of the location (activity can fully be done without the note and favour will be gained the same regardless).

Participating in a gang bust is advised when possible, as they are a good source for oak, teak and mahogany planks. One can easily obtain 100% favour by going to multiple gang meetings as they are not synchronised; it is also cheaper than cannoning lizardmen in the canyon.

The location of the gang meeting follows a rotation shared by all servers, asynchronously. This means that every world will go through the same sequence of locations, but in an un-coordinated fashion. While a specific world might be holding a gang meeting, another world could already be timing down for the next one. Some worlds are coordinated, possibly because hosted on the same servers or in the same server facility; these tend to be worlds assigned to the same country and with sequential numbers, for example 303 and 304 for Germany, and 306 and 307 for the US west coast. Most worlds are within seconds of each other, while others vary by a few minutes. 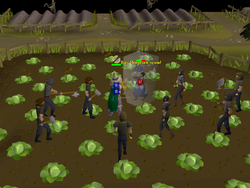 A player attacks the gang boss.

When the gang boss dies, the player that killed them will receive 10% favour toward Shayzien house. Kills on other gang members count as only 2% favour.

Five minutes after the meeting begins, any remaining gang members will attempt to leave the area. Non-aggroed gangsters become un-attackable, and shortly disappear. Aggroed gangsters will remain in the area so long as one gangster is in active combat; immediately after all active skirmishes cease they will become un-targetable and disappear. This happens as soon as a gangster dies so it is impossible for lone players to drag a meeting into overtime. Wounded gangsters may die instead of disappearing, dropping their items, and counting towards the player's favour. As there is a chance that wounded gangsters may die after 5 minutes, attacking the boss near the 5 minute mark is an easy way for combat pures to get an intelligence drop without having to risk taking damage by fighting him normally.

Killing a gangster gives 2% Shayzien favour, while killing a gang boss gives 10%. Intelligence can also be found from killing gang members; gangsters uncommonly drop them while gang bosses will always drop them. This can be handed to Ginea for a training manual, which when read gives

Participating in a gang bust is advised when possible, as they are a good source for oak, teak and mahogany planks. One can easily obtain 100% favour by going to multiple gang meetings, and doing so is cheaper than cannoning lizardmen in the canyon.