From Old School RuneScape Wiki
Jump to navigation Jump to search
The RuneScape Wiki also has an article on: rsw:Tai Bwo Wannai Cleanup
For a strategy guide on obtaining a gout tuber, see Gout tuber/Strategies.

Players must have completed the Jungle Potion quest before they can take part in the minigame. To begin this minigame, speak to Murcaily north-east of the minigame icon, right next to the gate to the hardwood grove entrance.

It is popular due to the special Hardwood Grove Woodcutting area containing teak and Mahogany trees, which are only accessible by paying 100 trading sticks. It is also a good way to obtain the snake hides necessary for Snakeskin armour and is the most reliable way to obtain proboscis.

Acquiring 60% Tai Bwo Favour rating is also a quest requirement for My Arm's Big Adventure (will be deducted during quest, therefore recommended to get 100% for diary prior starting the quest).

Besides the trading sticks, the following items are obtainable while playing this minigame:

Many useful supplies are sold at Jiminua's Jungle Store to the north-west. Consider bringing coins and understocking on those items until needed to conserve inventory space. Aisles is also located at the store, and will exchange bank notes for 5 coins per note, so it is advisable to bring stacks of noted supplies (especially useful if fighting broodoo victims).

If fighting the broodoo victims (approximately 8 doses per victim):

To start the minigame, players must speak to Murcaily on the east side of the village, near the Hardwood Grove. He will tell players about the people who have started to return only to find their village overrun by jungle and other nasty surprises. He will then tell the player that in order to help out, they must help rebuild and reinforce the village fence by cutting the jungle.

In return, players will gain favour, which can be exchanged with villagers for trading sticks. Players can get a machete from Jiminua's Jungle Store to the north-west for about 60 coins. Players earn Tai Bwo Favour rating by hacking the various levels of jungle and by killing the monsters that appear. This rating allows players to acquire trading sticks from the locals which later can be used to purchase various rewards and services. 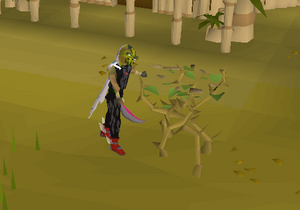 There are three types of jungle surrounding the village, with light being the most common and dense the most rare. A machete is required to cut them. Players can also obtain opal, jade and red topaz machetes, which have a progressively higher speed at chopping down the jungles. 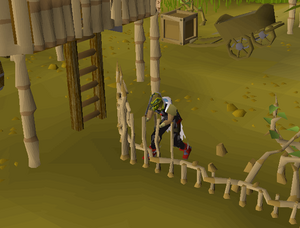 A player repairing a part of the village fence in Tai Bwo Wannai.

Several types of enemies may attack players while they are cutting jungle. They work the same way as random events—sometimes one kind will pop up, sometimes another. All poison conditions in this minigame start at 11 damage per hit. The player may also reveal gout tubers or gem rocks while cutting these.

For lower levels who want to minimise their need for praying and poison cures, it could be advantageous to let a mosquito or swarm continually attack the player while they continue with the minigame. This will also prevent the player from getting hit by any broodoo victim attacks.

Threats to the village[edit | edit source]

You may also kill wild Jungle spiders (such as those wandering north of the calquat patch) to earn favour. This is a much faster method to earn favour for players with high combat levels. Remember that prayer is essentially free here with the Tribal Statue so close by. (Note: you will have to obtain trading sticks at least once first by repairing one of the rotten fences and speaking to Murcaily before being able to use this method. If this is not done, the jungle spiders will grant no favour). Should you use this method, you will not find any Gout tubers.

Note: Killing other player's enemy spawn awards the killer the favour, not the player who spawned it.

Broodoo victims are an enemy category of their own. They are combat level 60 and come in three different colours. If Tai Bwo Wannai Trio has been completed, they will not be a problem to kill with Protect from Magic, as the Tribal Statue nearby works as an altar (Note: the statue will only work after you have spoken to Tinsay in the village). Otherwise, their powerful and far-ranging magical attacks are the reason dragonhide armour is strongly advised for the minigame. Though they can be killed by normal means, they take significantly reduced damage from normal attacks thus it is recommended to exploit the specific weakness relating to how they were killed if Tai Bwo Wannai Trio has not been completed.

To kill them by normal means, it helps to have high combat stats and an appropriate weapon of choice at that level.

Note: Each victim is worth ~3% favour, 1% more than a jungle spider. It's not recommended to fight them unless you want their drops. Broodoo victims drop tribal masks, which may be combined with two snakeskins and eight nails to make a broodoo shield.

Sometimes instead of a monster spawn, there may be something beneficial to players. 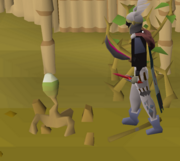 Gout tuber uncovered under some jungle.

A gem rock uncovered under some jungle.

Almost every villager in the Tai Bwo Wannai will give players trading sticks in return for some of their favour percentage (for example if you are given 100 sticks your favour will be reduced by around 10%). The amount of trading sticks received at any one time depends on the player's favour. The amount is also increased if the player is wearing villager clothes that can be bought from Gabooty.

Trading stick suppliers spread around the village—some of them are upstairs, and some are far outside the fences. They also move around, so it may take some effort to find them.

Note: You must receive your first trading sticks from Murcaily before being able to receive them from other villagers. You can tell if a villager has trading sticks for you by looking at their off-hand.

In addition to supplying trading sticks, Rionasta has the added advantage of providing players the means to send items to their bank without a lengthy trip to Ardougne, Shilo Village, or Mor Ul Rek. Banking any item costs 10 trading sticks, whether it is stackable or not. The service can be accessed by speaking to Rionasta and asking what he does around there.

Note: Rionasta only lets players deposit items, not withdraw them. His service also does not include currency, whether it be coins or trading sticks.