From Old School RuneScape Wiki
Jump to navigation Jump to search
The RuneScape Wiki also has an article on: rsw:Tai Bwo Wannai Trio

Tai Bwo Wannai Trio is a quest that follows where Jungle Potion left off. The chief of Tai Bwo Wannai requests your help in reuniting his sons, requiring you to seek each of the three out and help them in a specific task. One requires aid in defeating the Shaikahan, another seeks the knowledge to catch Karambwan, and the third seeks some unusual foodstuffs before he'll return to the village. Completing their individual tasks requires coordinating between the sons. Upon completing said tasks, the sons return to Tai Bwo Wannai.

Items needed: A knife, Karamjan rum (or 30 coins), and a banana.
Items recommended: Amulet of glory

Teleport to the Musa Point banana plantation with your amulet of glory and pick a banana if you do not already have one. Then, go south to the Karamja Spirits Bar and purchase Karamja Rum. Slice the banana using your knife and add the sliced banana to your rum. Make sure you combine the sliced banana with the rum BEFORE you leave the island, or the rum will break. The rum combined with sliced banana will be necessary in a later part of the quest.

After obtaining the Karamjan rum, travel south to Tai Bwo Wannai and talk with Timfraku upstairs in the north-west house with a quest icon above it. Talk with him, and say that Trufitus sent you. Talk to him again, and when he thanks you for what you have done so far, pick the option "So far??" and he will ask you to gather his sons, Tamayu, Tiadeche, and Tinsay, in the village. Warning: The Tribesmen in and around Tai Bwo Wannai are aggressive to players level 64 and under and deal very high poison damage, easily killing unprepared low-level players. The general store north of Tai Bwo Wannai sells antipoisons if you forgot to bring some.

Optional: To avoid accidentally banking/losing the Karamjan rum (sliced banana), you can visit Tinsay at Cairn Isle (near fairy ring CKR) and give it to him. This will fulfil the first of three requests he makes later on. A map of Karamja.

Items required: An iron spear or better (Black spear, Bone spear, and Leaf-bladed spear do not work), a small fishing net, a pestle and mortar or 6 gold, and an Agility potion(4).

Optional: Logs (or an axe to chop them), a tinderbox, and a raw karambwan (one is obtainable later in the quest), Brimhaven Teleport. 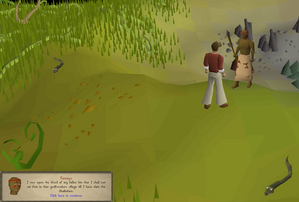 Tamayu must slay the Shaikahan before he returns to the village.

You can find Tamayu south-east of Tai Bwo Wannai Village at the mine. He will return to Tai Bwo Wannai only once he has killed The Shaikahan. Talk to him twice; ask him when he will succeed and offer to join him on his next hunt. During a cutscene Tamayu will fail to defeat The Shaikahan. He will claim that he is overpowered by its strength, regenerating health, and agility.

Do not give your spear or Agility potion to Tamayu yet. You must poison the spear with karambwan paste, obtained later in the quest, before giving it to Tamayu. Go to the Holy Lake south-west of Tamayu and net-fish for Karambwanji. If you need logs, there are some trees that can be cut to the south-west of this pond near the Hunter icon on the minimap.

Fish for at least 22 Raw Karambwanji. (It's recommended to have a few spares or keep the net for later if your Cooking level is low.) (They are different from Karambwan and stack like other forms of bait.)

Now travel north. If you don't have a Pestle and mortar, you can buy one at Jiminua's Jungle Store (general store icon) north-west of the village. Then continue and talk to Lubufu (near the POH portal, Brimhaven Teleport is useful here) by the fishing icon on the south-eastern shore of Brimhaven. 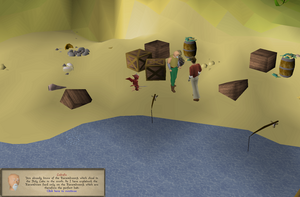 Select to "Talk about him..." and ask him how old he is. Then offer to help him collect bait, and then say that he sounds like he could do with the help. He will then tell you to catch 20 karambwanji. Give him the karambwanji and ask him what he uses to catch karambwan, followed by what he does with them, and he will ask you if you want to become his apprentice. He will then give you a karambwan vessel and the information that it must be filled with karambwanji as bait. You can now catch raw karambwan with 65 fishing, you will also receive 1500 Fishing experience. If your character goes idle after a couple seconds of fishing, you need to fish at the fishing spots next to Tiadecehe in the north east of Karamja. It is recommended you collect more vessels at this stage, one for Tiadeche, one for Tinsay and one for yourself. You can obtain more by dropping the one in your inventory and then asking Lubufu for another.

Once you have obtained as many as you wish use a raw karambwanji on one of these vessels.

See below on how to complete the Tamayu part of this quest. 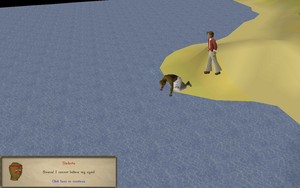 Items needed: A Karambwan vessel, and a Raw karambwanji. Logs and Tinderbox, and a Ranged or Magic method to kill a Monkey if you want to save time.

Next, go to the north-east corner of the Karamja jungle (fairy ring DKP) to seek out Tiadeche. Once found, talk to him. He says he will go back to Tai Bwo Wannai after you teach him how to catch Karambwan. Give him your full Karambwan vessel (use your karambwanji on the vessel first, then use the full vessel on Tiadeche) and he will subsequently give you a Raw karambwan. He will also ask you to visit his brother Tinsay for another matter.

While you are here you can grab the nearby Seaweed that spawns on the beach as you will need it later on.

Once you have the raw karambwan, cook it to obtain a poison karambwan. If you are an Ironman and burn the Karambwan you will need 65 Fishing in order to catch another. Consider using the Hosidius Kitchen or some other Cooking boosts to minimise the risk of burning it. Worth noting, catching a raw karambwan is a Karamja medium diary achievement.

Now, head back to Tamayu by running south. If you didn't purchase the Jogre bones, kill a Jogre on the way and pick up the bones. If you don't have a spear, you can continue killing jogres until they drop an iron spear. Cross the agility shortcut, then run west to the mine. 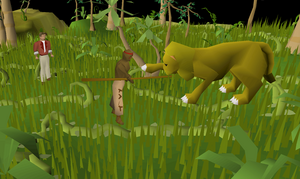 Once you have returned to Tamayu, use the newly poisoned spear and your Agility potion(4) (it needs to have 4 doses) on him (being careful not to drink the potion). You can now join Tamayu on his hunt and a short cutscene will play showing Tamayu being successful on his hunt. Once he has slain The Shaikahan he will promise to return to the village once you've talked with his brothers and father.

To save some time helping Tinsay, kill a nearby monkey (with Ranged or Magic) and use its corpse on Tamayu. He will ask you if you'd like to skin it, returning the monkey bones and skin (you only need to save the skin).

Now head to Cairn Isle in order to talk to Tinsay. He is located up the rockslide and across the bridge. He'll tell you that he's trying to repair the Tribal Statue in the village. He has lost his sanity recently due to some sort of accident with a Jogre. He asks for three special local items.

Items needed: A banana, Karamjan rum, and a knife. Note that the knife is not strictly required. A slashing weapon seems to work as well.

The first thing he'll ask you to get him is a bottle of banana-flavoured rum. Head to Musa Point, and buy a bottle of Karamjan rum from the liquor store there. Then, go into the general store, take the banana and knife off the table and use the knife with the banana to slice it. Add these slices to the rum and give it to Tinsay (be careful not to eat the slices).

Do not use a whole banana on the rum without slicing it. It will create a joke item, Karamjan rum (banana). If done so you will need to get another bottle of Karamjan rum to try again.

Items needed: Seaweed, and a monkey skin or a Ranged or Magic method to kill a monkey.

Next Tinsay wants you to bring him a Seaweed sandwich. If you do not already have the items cross back over the bridge to collect Seaweed from the beach and equip your Ranged or Magic gear in order to kill a Monkey. Collect the Monkey corpse and take it back to Tamayu to be skinned and be given Monkey skin.

Once you have both items use them on each other to create a Seaweed sandwich to give to Tinsay.

After you make the seaweed sandwich, use one of the karambwan vessels on Tinsay to receive the Crafting manual for Tiadeche. He won't accept it until you make the sandwich.

Items needed: Jogre bones, a raw karambwanji, a pestle and mortar. Recommended: logs, and a tinderbox (for cooking the pasty jogre bones).

You now need to get some burnt jogre bones marinated in karambwanji sauce. Be careful not to bury the bones! The bones can be accidentally buried at any step in this process.

After you're done with all three brothers, talk to Timfraku up the ladder in the north-west house of Tai Bwo Wannai again to complete the quest. Then, talk to each of the three brothers in their local shops for the listed skill experience.

Note: The in-game chatbox messages will incorrectly say that Tiadeche teaches you how to cook Karambwan, this is not true. Tinsay is the one that teaches you how. 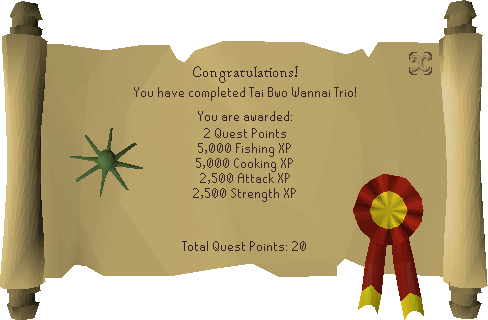