Tale of the Righteous is a quest announced on 21 March 2018[1] and polled in Old School Content Poll #58, which it passed. It follows Client of Kourend in the Great Kourend quest series.

The quest can be started by speaking with Phileas Rimor in his house just west of the The Cloak and Stagger tavern in Shayzien.

Speak to Phileas Rimor in his house just west of the The Cloak and Stagger tavern in Shayzien. Ask him if he needs any help, and he will tell you that his ancestor, Magnus Rimor, led an expedition to Mount Quidamortem in the Kebos Lowlands over a thousand years ago, and never returned, with the records declaring he perished along with the party. 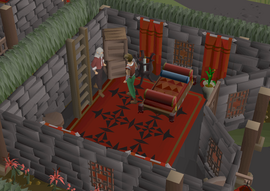 A player talks to Phileas in his home.

However, a few days ago, he received a parcel from an unknown individual containing an old journal written by King Shayzien VII, with a note on the parcel claiming the journal was stolen from the Tower of Magic during the uprising against Xeric in the 47th decade. Although most of the journal is illegible, he managed to find an extract stating "Quidamortem's creatures are compatible. The experimentation is proving successful and we will soon be ready to mass produce."

Items needed: A ranged weapon with ammunition (darts and throwing knives also work), and runes to cast any magic combat spell. Note: Bring enough runes for more than one cast - it's possible to "fail" the attack spell. A swamp lizard or equivalent may be used; just swap between each combat style.

Head to the Arceuus Library, and teleport to the Archive via Archeio on the ground floor[UK]1st floor[US]. Speak to Pagida, who has been investigating King Shayzien VII's additions to the Tower of Magic.

Speak to Pagida, and he will tell you that King Shayzien VII spent more time in the Tower of Magic than any other King, and oversaw construction of various new sections, including a prison, which was built around the same time as the expedition, but has been abandoned for many years. You will ask if you can access the prison, and he will agree to do so. 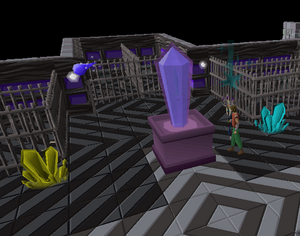 Cleansing the crystals in the Tower of Magic's prison.

The prison contains a strange device in the centre that can be pushed towards the north, east, south and west. Players can obtain a dusty note (optional) by searching the skeleton to the south-west part of the prison. The note provides clues of the objective, which is to have all the crystals cleansed in order to open the north prison door:

Note: You must bring all 3 attack styles with you at the same time. If you have to leave this area only partially completing it, you will have to redo this segment again.

Once all the crystals have been cleansed, the prison doors to the north will open. Investigate the skeleton inside, and the player will read some writings carved into the floor stating, "Lizards on the mountain. Do not trust the King. The altar is a lie."

Items needed: A pickaxe and rope. Equipment and food to defeat a level 46 enemy. Note: Bring an antipoison for your fight with the corrupt lizardman. 50 coins if using the minecart to Mount Quidamortem.

Return to Phileas, and tell him of your discovery. He will ask that you attempt the same expedition in order to find out what the original team discovered, and asks you to speak to Lord Shiro Shayzien in the Shayzien Encampment. 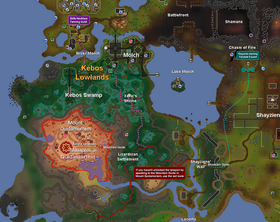 Make your way to the War Tent within the encampment, and climb the ladder inside to reach Lord Shayzien. You will ask him if you can go on an expedition to Mount Quidamortem. He will agree on the condition that any discoveries made are to be brought to him first, as King Shayzien VII was his ancestor and he wants to be made aware of any discoveries that may present him in a bad light.

Head to the top of Mount Quidamortem. You should bring food and some type of antipoison as you will run past various aggressive, poison-inflicting lizardmen on the trip to the mountain regardless of your player level. After you arrive at the peak, speak to Historian Duffy in the tent to the east (the water symbol on the map) (whilst you are here, you can speak to the mountain guide to unlock the ability to quick travel to and from the Shayziens' Wall). You will tell him of the dusty note you found in the prison, leading him to believe that the lizardmen were not of natural origin and have existed before Xeric did. 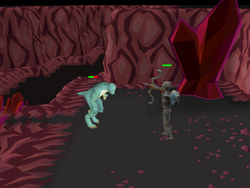 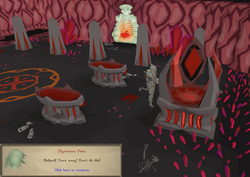 A player inspects the unstable altar, and hears a mysterious voice.

Upon walking close to the magic gate, a Corrupt Lizardman will appear and attack you. The corrupt lizardman will deal poison like the other lizardmen, so an antipoison will be useful. If you die at this battle your grave appears outside of the crevice. Defeat it, and inspect the Unstable Altar past the gate. You will hear a Mysterious Voice exclaiming "Rickard! Turn away! Don't do this!", but you will be unable to make sense of it.

Return to Duffy and tell him of your discoveries in the cave. The museum expedition will then travel into the cave; follow them. Once inside the cave, speak to Duffy. He will tell you the cave does indeed predate Xeric, and wonders if it was King Shayzien VII who created the lizardmen. He will add that some believe the two are one and the same. He will then tell you to speak to Gnosi. 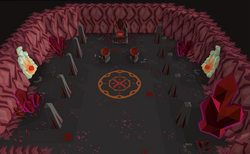 The temple housing an unstable altar.

Speak to Gnosi who is nearby. She will tell you the reason Xeric ruled Great Kourend unopposed for over a century was because of the power of the Dark Altar, and that he came to Mount Quidamortem to construct the Chambers of Xeric after his exile. Gnosi believes the reason Xeric survived in Quidamortem is the unstable altar nearby, which appears to give off the same power as the Dark Altar. She further states that it was created to amplify the Dark Altar's power, allowing it to reach areas it previously could not. As it is still giving out power, Gnosi wonders if Xeric had used it to extend his lifespan. She will then tell you to report these findings to the Library, but you tell her that Lord Shayzien asked you to report to him first should any discoveries be made. 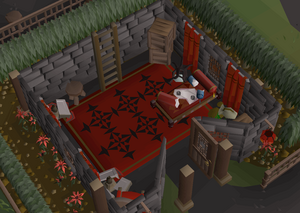 Phileas' house has been trashed, and he has mysteriously disappeared!

Return to Lord Shayzien (talk to the Mountain Guide to make the journey faster if you don't have a teleport) and inform him of your discovery. He will ask for proof, and asks you to visit Phileas for the journal. Return to Phileas, only to find that his house has been trashed and he himself has gone missing.

Return to Lord Shayzien once more, and he will open an investigation into Phileas' disappearance. Without the parcel, no concrete evidence can be linked to King Shayzien VII and your discoveries, but he will contact the research team and ensure their discoveries are documented. 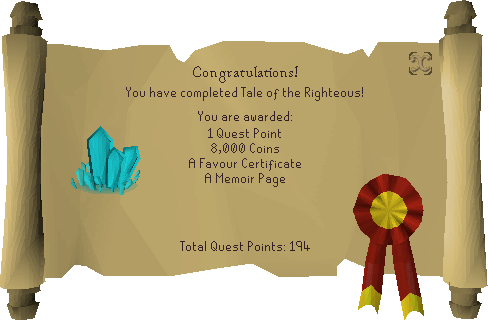 Completion of Tale of the Righteous is required for the following: 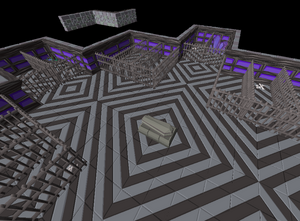 The appearance of the Tower of Magic's prison prior to the release of the Tale of the Righteous.