Insights from the author[edit source]

I've recently found a txt file of the diary's original draft, so I thought I'd post parts of it on the item's talk page, alongside some other tidbits and personal thoughts when I was writing the diary, instead of on the main article itself, because you'll soon see there's a ton of them and it'd probably be twice as long as the contents of the item page.

So I'm posting it here, like an exclusive insight kind of thing. A word of caution, it'll probably sound like I'm tooting my own horn, I suppose.

The question that started it all[edit source]

A question was asked on the weekly Q&A on 27 March 2019 asking "Silverlight and Darklight both have quests explaining their context within the game, but Arclight is just kind of there? Can we get a miniquest to explain its backstory? This would tie in to the Catacombs of Kourend." The following is the discussion that followed.

As the story would involve Great Kourend in some manner, I immediately set out to write a story, as I'm quite the lorehound and also one of the leading experts of the kingdom's lore; behind Mod Ed, I sure hope.

Using the knowledge I have of Great Kourend's lore that I acquired through meticulous research of in-game dialogue and texts during my writing of the massive history sections of the Great Kourend article as well as for the Kebos Lowlands article, I managed to get an rough outline of what I wanted to do within ten minutes. The following outline is part of the original text file of the draft:

As you'll soon see, the original outline was way different than the first draft I wrote. The first draft took a little under an hour to write, and I used the outline to guide what I wanted to write. Here is the first draft:

As you see, I made a fair few improvised changes that stray a bit from the original outline.

As the adventurer is from Great Kourend, naturally he'd use their date formats. I had to recheck the decades to make sure they'd be shortly after the end of the War of the Five Houses in the 123rd decade. I was a bit tempted for the days to be in the range of 35 to 73, but making it too meme-y might've lowered my chances at getting this story in-game, so I just mashed the keyboard for a starting day.

Varlamore seemed like a good place to start the story in, but I decided that that particular diary entry should be set in the past because writing out what would basically be Shadow of the Storm, but different, would inflate the diary too much. I also wanted to pay tribute to GentleTractor for his "Zeah Redesign" post, so I decided to make up some mighty creatures that would live in those areas. I created the Desert Wyrm for the Great Savannah because Karuulm, the dragonkin who created the hydras, drakes and wyrms would have most likely traveled further south after creating the Great Olm, and then created the Cloud Titan who resided in Tempestus, the floating city (which I interpreted as a magical city above the clouds akin to Cloud City from Star Wars). I originally wanted to create a camel boss for the Great Savannah, but then thought of the Desert Wyrm as more mighty and strong.

I thought the entries about him leaving his parents because he didn't wish to become what his parents wanted him to be would be a nice fit for why the adventurer left Great Kourend in pursuit of adventures rather than farming, and is the reason why I chose the adventurer's hometown to be Hosidius, as they're mostly pacifists; at least, the early settlers of Hosidius were.

Next, how the adventurer got his demonbane sword. I connected both Imcando dwarves and the adventurer so that it's somewhat in parallel to the events of Shadow of the Storm, where the adventurer is enlisted by thm to kill the demon that's been a thorn on their sides.

I opted to write in Imcando dwarves because they're master smiths that can work with almost any metal. With the Silverlight having special effectiveness against demons, I decided to write that they smithed a version of Silverlight using bane ore, an ore in RS3 that can be magically tuned against certain creatures, that is different from the Silverlight players are familiar with. This wouldn't overlap with the lore of Silverlight because there is no lore about the sword's creation or what metal it was made out of (besides silver), and from what Silverlight does, it is basically a demonbane sword.

The passage involving his acquisition of his version of "Darklight" would later be moved to the later diary entries to suit my ever changing vision of the diary mid-writing.

Mid way through writing, something clicked in my head, and I thought "maybe the adventurer never obtained Arclight at all"; maybe he'd nearly create it by accident, but miss something vital? This would make it more creative and stand out more among the heavy competition I expected I'd get once I submitted the story. I never did find out how many players actually submitted a story, though I know that the Song of the Elves lore competition had only 30 submissions, 9 of which made it in-game.

And of course, the phrase "breaking my spine" was a reference to myself if that wasn't already clear. I was tempted to capitalise the S, but decided not to for the sake of grammar. After the story was finished, I posted it on Twitter.

The next, final draft[edit source]

It was quickly pointed out to me that savannahs are NOT deserts, and sandstorms don't happen in savannahs, though rainfall does occur. So a simple rewrite that the demon summoned torrential rainstorms instead of colossal sandstorms was done. In addition, the Great Savannah was actually called the Avium Savannah on GentleTractor's post, so that got fixed as well, then changing the name "Desert Wyrm" to the "Colossal Wyrm". Good thing I didn't stick with the camel warrior, hmm?

The next things were general grammatical improvements and small additions to make the story flow better and have locations more familiar to someone who'd read this.

I decided to include silver in the creation the adventurer's sword for consistency in case they ever shed light on the creation of the real Silverlight. In addition, I realised afterwards there really was no instructions in-game on how to assemble the dark totem and where you'd use it, so I decided to write those in as well.

The full differences of the original and final drafts can be seen here.

Lastly, a name for the item. I figured after being so brutally beaten that the diary would be stained with blood, so I opted for either "Bloody diary" or "Blood-stained journal". I'm not too sure why Mod Ed chose what he chose at the end, though I reckon Bloody diary has a nicer ring to it. Fun fact, the internal name for the bloody diary is prif_arclight_book.

I also added a suggested examine text: "A diary of a Hosidius adventurer. Most of the pages are stained with blood and have become illegible." Again, Mod Ed chose to only include the latter sentence, most likely because the one I suggested was too long.

I posted the revised draft on Twitter again, and that was the draft Mod Ed ended up putting in game. I waited several months hoping it'd get put in, and it wouldn't be until the release of Song of the Elves that I realised that Mod Ed used that submission as my lore competition entry rather than the two others I submitted for it: one of which detailed elven history before Seren's arrival, and one focusing on an elf who realised the cost of Seren's gift to them. A surprise to be sure, but a welcome one! 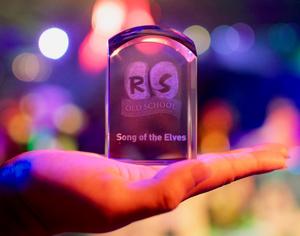 The trophy I picked up from Mod Gambit.

And that's pretty much it; what started as a simple question from a player for a Q&A eventually ended up getting one of my stories in-game, and it's one of the biggest highlights in my many years playing the game. Of course, the next thing to wait for was the engraved crystal decoration that would be sent to me in-real life.

That never happened, but as I was going to RuneFest, I asked Mod Gambit if I could just pick it up from him. I did, but it turns out Gambit had given the wrong prize; rather than an engraving of "Song of the Elves", it was an engraving commemorating the staff who helped make Old School Mobile! While trying to find Gambit again, I ran into Mod Roq, who said there were only 50 of these when I asked him what the prize actually was. So we got that sorted out, and it now sits beside my desk. --