That would be because someone hard coded in a number. It would have shown that number regardless of the value of cosmic runes; in fact, it didn't even reference cosmic runes at all to get the number, it was just a printed number. I've fixed it and accounted for pure essence used, as well as adding total profit values to other runes.
JohnSixxScott (talk) 03:01, August 5, 2017 (UTC)

Calculations previously did not account for 2.5 exp per block when using on the dark altar. My corrections leads to more exp per blood, fewer needed to be crafted, fewer inventories needed.

There seems to be a missing section - Chaos Runes. Disappeared in an earlier edit, perhaps?

I've expanded lava runes into a combination rune section including the slower but more profitable runes.

Potentially in the future, runes made at the earth altar could be added (via balloon transport/cwars or abyss). I have not tested much but I believe it can be about 120 laps/hr with balloons.

Validation of Lava Xp Rates Should be Reviewed[edit source]

Below is a picture of the xp rates I was getting while Lava Runecrafting. This was with Magic Imbue and at 74 Runecrafting. After 3 hours, the rate remained at 43k. Would descirbe myself as the average player, but I was also very actively concentrating during this 3 hour session, yet the wiki describes rates at around 60k/hr. I do not have a crafting cape but even with one and being tick perfect, the rates seem exaggerated and not very doable. Can someone validate these xp rates so the community gets a better understanding of the expected outcomes?

From this video, it takes ~23s per trip with a crafting cape + 2 pouches for ~73k xp/hr. Using a medium+large pouch instead of a large+giant, this would peak at around ~62-63k xp/hr. The Castle Wars bank should be pretty similar, though you'll spend a little more time equipping new rings. Lavas are really hard to reach peak xp rates due to the relatively short trip time (a huge chunk of time is spent at the bank). -Towelcat (talk) 05:06, 20 March 2020 (UTC)

Regardless of the exact time it takes, I think it's incorrect to assume the same number of runs per hour for all levels. No matter your setup, you cannot fill, unload and perform a second offering in 0 seconds, which this page suggests. If 140 laps is used as the metric for pouches, a higher lap count should be used for no pouches (~160-180 depending on how you want to figure it out). Especially worth pointing out that the difference is very amplified if you aren't tick-perfect or on mobile. I suspect most players will get higher xp rates if they don't use pouches. --Mirhagk (talk) 05:53, 18 February 2021 (UTC)

Do people still use abyss rc methods (single nats/laws/deaths, double cosmics) for lower levels at the current year? From what I know, the vast majority of the people who don't do lavas do ZMI until 77 and continue with afk zeah rc. Pures and skillers can even do library these days.

These abyss methods are pretty bad xp/h and mediocre profit at best, except maybe for double cosmics. You would only do those methods for gp, and you would get something like 600k gp/h for the bad xp/h, which used to be decent like 3–4 years ago, but now there are a lot easier ways to make money. For "casual" players ZMI offers much better xp and you still get some money from the runes.

I don't think they belong in a skill training guide, and I'll delete them from the guide at some point and move the relevant information to double nats/laws (still bad xp but you can actually make some money). The page is already quite long and it wouldn't hurt to trim it a little.

Dropping Runes at the Ourania[edit source] 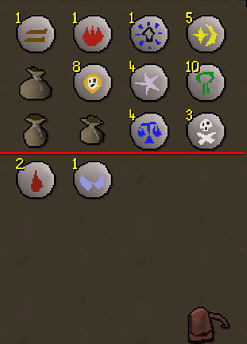 I was looking over the runecrafting guide and I noticed an error. The fire rune section recommends you tele to castle wars for banking, as the bank near the altar is just a deposit box. This isn't accurate, I'm not sure when it was added but there is now a bank chest at that location. Emetobot (talk) 19:39, 15 August 2021 (UTC)