If you do get them, can you get an image from the Equipment Stats interface? Wield nothing but the spear and max brightness if you can. -- 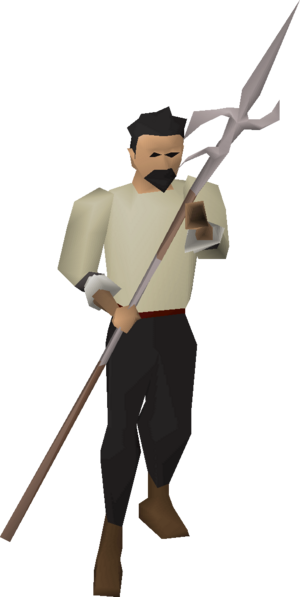 on 26th november 2013 i bought z spear for 400k and next day i bought another one for 350k :) perosnaly i like to have all weapons and items that i will need in future or now, no matter how cheap or expensive they are atm. I gues i was lucky enough that i bought z spears at that time, because i would have to pay 5-6 times more now :D Anyway im not selling them, even if ill never use them, like i said i love having stuff in my bank.

Question 32: Should Otto Godblessed be willing to convert a Zamorakian spear into a single-handed Zamorakian hasta on payment of 300,000 coins? The hasta would be tradeable and would have the same stats and requirements as the spear.

I personaly voted yes, because that means we get awsome 1handed stabing weapon and we can use dfs or rune defender with it.

Right now 77% of people voted yes, so its looking good.... I just hope rest of you guys vote yes, so we can get awsome weapon from otto godblessed just for 300k :D Afc its kinda risky, but if your willing to risk it i recommend u should buy as many zammy spears as you can now.

Ok so i told u guys to buy zspears year ago and i dont know how many of you listened :D anyway i bought them very cheap because i wanted to have them in bank, just in case i was gonna kill waterfiends or whatever....i just sold them for 1st=11.75m and 2nd=12m witch makes it total profit of: 23m anyway as we all say...if i knew....i would buy more of them :) at least now we know that jagex (oldschool team) will release bosses if we want them to. I would say get ready for queen black dragon....but u dont really need to :D u can do qbd easly with any weapon. --