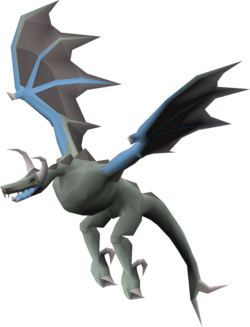 Taloned Wyverns are Slayer monsters that require a Slayer level of 66 in order to be harmed. They reside in the Wyvern Cave on Fossil Island. Like with other Wyverns, an elemental, mind, dragonfire or ancient wyvern shield provides significant protection against their icy breath. These monsters require completion of the Bone Voyage quest to be assigned as a Slayer task.

In addition to Melee and icy breath, Taloned Wyverns also seem to use a Ranged attack that resembles a lighter coloured Water Bolt. This attack ignores Protection prayers and hits around 10. Fighting within Melee range is advised as they will be made less likely to use this.

Drop rates estimated based on 95,043 kills from the Drop Rate Project, unless otherwise cited.

There is a 1/123 chance of rolling the tree-herb seed drop table.