The Tar Swamp is a location on Fossil Island. The swamp is home to many flora, such as pitcher plants, spine mushrooms, skrooms, and grim lillies. However, it is also home to Hoop Snakes and dangerous Tar Monsters, who appear from moving tar bubbles beneath the swamp.

A Magic Mushtree can take players to the centre of the swamp. However, this requires reaching there first without it. In the north-west corner, there is a rubber cap mushroom that can be jumped on to get there directly, but 9 mushrooms must be placed in the mud pit on the other side beforehand to cushion the player's fall, or very high damage (50+) will be taken. The mud pit needs to be refilled with 9 mushrooms after every jump.

The Tar Swamp is a hostile area which requires navigating through thick vines, so an axe is required. In addition, vines on the ground may need to be cleared with a rake to pass through. Throughout the swamp, players may see moving tar bubbles. Should they get too close to them, a level-132 Tar Monster will appear and attack the player. As their attacks are typeless, protection prayers will have no effect, so bringing food is recommended if players are staying here for extended periods. They can be temporarily stunned by rolling hoop snakes toward their direction.

In addition, spine mushrooms can sting the player as they pass through them, dealing up to 10 damage and inflicting poison upon the player.

In the southern end of the swamp, players will find the Deranged archaeologist, who fights similarly to the Crazy archaeologist found in the Wilderness ruins. However, he is much more dangerous, as his special attack can hit up to 56 damage on a direct hit.

Sulliuscep mushrooms can be chopped down with a Woodcutting level of 65. Chopping these will give the player mushrooms. On occasion, players may also receive Mort Myre fungi and sulliuscep caps, in addition to the numulite and unidentified fossils that they receive from performing activities on the island. 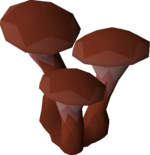 Six can be found throughout the swamp, indicated by the

Should the sulliuscep spawn in a particularly dangerous area where the player is exposed to attacks from the deranged archaeologist or tar monsters, players can kill the sulliuscep instantly by using the "Inject" option, which requires 1 proboscis and 1 fungicide spray. This forces the sulliuscep to spawn in another area, which the player must find once more. 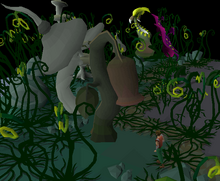 The bellshroom found in the Tar Swamp.

South-west of the Magic Mushtree, there is a bellshroom that can be investigated, giving the message Maybe it's hungry... Using breadcrumbs will allow players to enter a small area slightly north-west. Here, the player is completely safe from Tar Monsters. 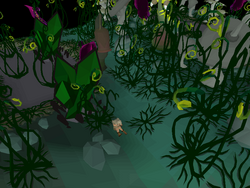 The small area in the Tar Swamp, accessible via bellshroom only.

Within this area, Charles Charlington, an archaeologist, can be found. He can be searched to receive his diary. There is a second Bellshroom inside the area which can be used as an exit. Using this bellshroom will take players back to the original entry point. 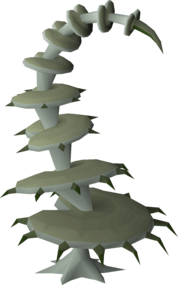 The Spine Mushroom found in the Tar Swamp.

Spine mushrooms can be found throughout the Tar Swamp on Fossil Island. They can deal up to 10 damage to players adjacent to them as well as inflict poison. As they are often in the paths where players chop Sulliusceps, some food and a way of curing poison is recommended when chopping them.