From Old School RuneScape Wiki
Jump to navigation Jump to search
The RuneScape Wiki also has an article on: rsw:Tarn's Lair
For the miniquest, see Lair of Tarn Razorlor.

Players cannot set up a dwarf multicannon within the lair. If players attempt to do so, a chatbox message will state This temple is ancient and would probably collapse if you started firing a cannon. 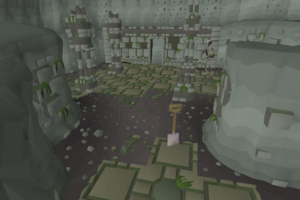 The entrance to Tarn's temple, blocked by a boulder.

The lair is found inside the Abandoned Mine and requires a Salve amulet to enter.

To enter Tarn's Lair, climb over the mine cart just south of the Zealot (featured in the Haunted Mine quest), go through the entrance of the Abandoned Mine, and then head north of the entrance.

Referring back to the map above, note the letters that identify the various doors and passages.

The route to reach the spawn point of Razorlor's toad batta is C-K, which is used in a step for an elite clue scroll. The fastest route is through A and then using a protruding wall trap to get pushed down into the hole on the east side as you exit, taking you to the small room just east of the toad batta.

Before you go off into this dangerous dungeon, there are things you need to know. This lair is very dangerous if not geared properly, and is guarded by various monsters and traps. 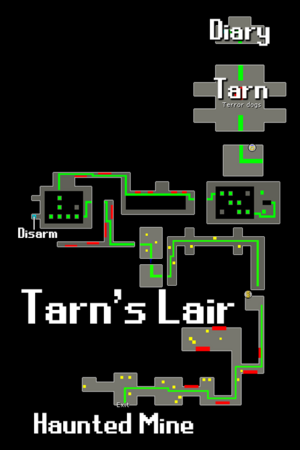 There are numerous traps, monsters and passages within the lair.

Note: It is recommended that you have Auto Retaliate OFF whilst in the lair to avoid running back into traps or floor spikes if a monster is attacking you.

From the entrance, travel as far east as you can and then north. It will cost 100 coins each time you use the bank. Some of the undead in the lair drop coins. 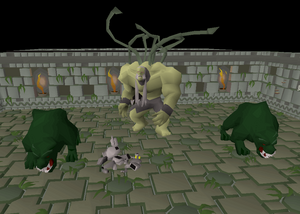 Tarn in his mutant form with two terror dogs.