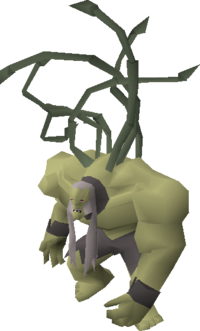 Tarn Razorlor is an evil necromancer that dwells in his lair beneath the Abandoned Mine. He is the boss monster in the miniquest called The Lair of Tarn Razorlor, and is guarded by his undead minions, animated steel suits, and Terror dogs.

Players may purchase or create a Slayer ring and immediately teleport to Tarn's Lair; completion of the miniquest is not required to do so.

His first attackable form uses Magic and melee to attack, the latter when within distance to attack the player. After the player defeats the first form, a smaller ghost form will appear, although this form exclusively uses melee attacks. A good tactic is to position the hostile terror dogs and animated steel armour behind Tarn so that only Tarn is able to attack the player. Prayer is rapidly drained while in Tarn's chamber, similar to Barrows.

Players receive 5,000 Slayer experience from defeating Tarn. In addition, players are able to enter the next room and obtain Tarn's diary, which enchants salve amulets into salve amulet (e). The enchanted amulet raises the wearer's Attack and Strength by 20% while attacking undead monsters, a 5% increase over the regular version.