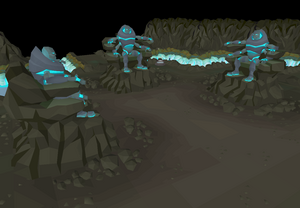 The Tasakaal are a race of golem-like creatures that inhabit Mount Karuulm, a sulphurous volcano found within the Kebos Lowlands.

The Tasakaal are former TzHaar that have left Mor Ul Rek long ago for Mount Karuulm. They were originally supposed to wait for orders, but after watching the world fall into disarray, they could not stand by and watch, so they left Mor Ul Rek to perform their task.

They maintain the balance between life and death. Despite the role they perform in making sure who lives and dies, they are not followers of Guthix, calling him a "pretender". Rather, they serve another unnamed entity.

At an unknown point in time, some humans decided to follow the Tasakaal, becoming the Kalith, a group of humanoids who help maintain the balance of life and death.

At another unknown point in time, they were met by Lord Trobin Arceuus, who pleaded with them to save his dying wife. The Tasakaal granted this wish, teaching Trobin the secrets of immortality to do so. However, they did not expect that Trobin would share the secrets to the rest of his people, causing the Tasakaal to resent them for this. However, Trobin ensured that his people would help maintain the balance of life and death, so the Tasakaal simply overlook this.

They eventually gifted "another" immortality, who was later revealed to be Xeric. Much to their disgust, Xeric ruled Great Kourend with an iron fist and had many slaughtered, greatly disrupting the balance. For this, the Tasakaal resent him, calling him the great betrayer and refuse to speak his name.

The Tasakaal continued to maintain the balance between life and death for thousands of years, until Year 169 of the Fifth Age. During this time, the Dark Altar catastrophically failed. The altar, being the source of life for all Arceuus citizens, would have nearly resulted in their extinction if Trobin had not sensed the fluctuation. However, he was too late to save Thana, a citizen of Arceuus, resulting in the first death in thousands of years.

An adventurer, who was passing by Arceuus, found Thana's distraught friend, Mori and asked them what was wrong. Mori sent them to the Kourend Council, but they were unable to help; in response, she asked them to head to the Tower of Magic, knowing that Trobin would not ignore the death of his people. Inside, the adventurer found that Trobin was in a trance, and met with his son, Asteros Arceuus, who informed them to seek the Tasakaal out, hoping that they would be able to provide a solution.

The adventurer met with the Tasakaal at Mount Karuulm, where they had anticipated their arrival and situation. While they refused to help at first, the adventurer offered to help them, upon which they admitted the people of Arceuus helped in their task. They sent them south of the mountain to find a grave, where there was a soul trapped in a corpse, and that they needed to free it. The adventurer found the trapped soul and freed it. During this time, they realized what was causing the problem and told the adventurer; a device was redirecting the power, and destroying it would fix it. The adventurer destroyed the device, saving the people of Arceuus.

Sometime later, the same adventurer returned to them to confirm the identity of Xamphur, as Trobin suspected they were both one and the same, and he gave them a damaged device as evidence. Like before, they anticipated their arrival, and refused to help, only to concede when the adventurer pointed out that the device had resulted in the failure of the Dark Altar and the soul that needed freeing. After inspecting the device, they confirmed them to be same, and that a Pyromancer had colluded with Xamphur to sabotage the Doors of Dinh. The adventurer recalled the incident and was worried they would be sabotaged again. The Tasakaal refused to help further, but were forced to do so when they pointed out that the Wintertodt would destroy all life on Great Kourend if it broke free, going against their values. They created a potion for them that would prevent further sabotage. 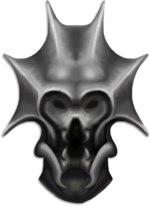 An early concept of the Tasakaal race.
Retrieved from ‘https://oldschool.runescape.wiki/w/Tasakaal?oldid=14266627’
Categories:
Hidden category: