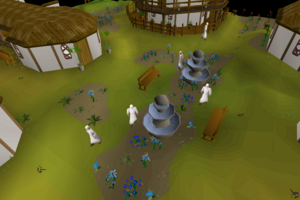 Taverley is a small Guthixian village located to the north-west of Falador, and is the most western point of the Kingdom of Asgarnia. It lacks a bank, but it is a starting point for several quests, and houses the Taverley Dungeon, formerly known as the largest dungeon in RuneScape, prior to the excavation of the Catacombs of Kourend in year 169 of the Fifth Age.

Lore-wise, Taverley is notable for having no strong political affiliations. The villagers tend to stay in solidarity, occasionally helping the Principality of Burthorpe with their war effort if the situation poses an immediate threat.

To the north lie Burthorpe and Death Plateau.

Note: There are also numerous monsters found in the Taverley Dungeon and the Heroes' Guild.