The Taverley Dungeon is one of the largest dungeons in Old School RuneScape. There are many monsters, ranging from low to high combat levels, getting stronger as players venture deeper into the dungeon. These include poisonous monsters, so bringing antipoison potions is advised if travelling through the parts of the dungeon that contain them. Taverley Dungeon is entirely single combat (although cannons can still attack multiple targets if the player is not in direct combat).

The entrance to the dungeon is found south of Taverley and west of Falador. Ways of getting there include:

The dusty key is required to access the deeper areas of the dungeon. To obtain it, go through the dungeon headed south to the Kinshra's (Black Knight) headquarters. Go into the narrow eastern passageway, kill the Jailer (level 47), get the jail key he drops, use it to open the door of the southern jail cell, and talk to the prisoner, Velrak the explorer, to get the key. (Players will not get the dusty key if asking for a reward. If this is done, talk to Velrak again and choose the other conversation branch.) Velrak will not leave the cell. If the key is lost, another one can be obtained in the same way.

Note: The drop trick can be used to get more than one key at once.

The dusty key is not tradeable, but it can be purchased in the Legends' Guild shop. A dusty key always spawns deep in the dungeon near the lava eel fishing area. Since this is in the area behind the gate, most players who do not already have a copy of the key cannot reach this area to take this spawn. Players with level 70 Agility can get the key by using the shortcut to the blue dragon area and going south to the lava eel area.

Notable features in the first half of the dungeon include: 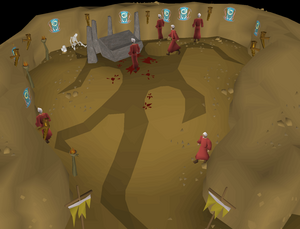 The chaos druids and their ritual altar. 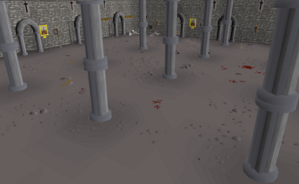 The magic axes in their domain.

The second half of the dungeon contains much stronger monsters. Access to this area requires a dusty key, or at least 70 Agility to use the obstacle pipe. Notable features include: 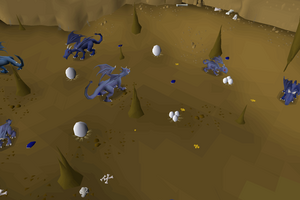 Blue dragons and their eggs.

The upper level contains blue and black dragons that can only be killed if they are assigned as a slayer task.

There are four Agility shortcuts located within the dungeon: