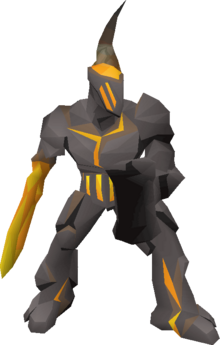 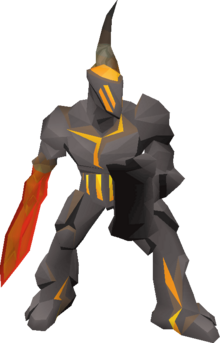 Tekton is one of the bosses encountered in the Chambers of Xeric. He was the artisan that created the chambers.

Based on his journal, Tekton was one of the few that were still loyal to Xeric after the majority of Great Kourend usurped him. He built many grand buildings to worship Xeric, though it is unknown if they are still around. He also believes he had a family and children, though their current status is unknown along with any potential descendants.

He oversaw the creation of the chambers under Mount Quidamortem, in addition to creating a new temple. Xeric was pleased that Tekton gave him the ability to use cave magic, but was disappointed when everyone else began using it, especially the "nasty high priest". Xeric ordered him to destroy the temple, which he did, but only slightly in the event that Xeric changed his mind. Tekton tried to teach Xeric how to use the magic without the aid of the temple, but failed in this endeavor.

Xeric later took him into the caves and gave him immortality by putting his soul in a new, indestructible body, enchanting his anvil and teaching him how to repair his new body. While he gained a large amount of power, Tekton soon noted he was unable to manipulate the crystals, though he believed that he wanted his strength, not intelligence. Xeric's companions began mocking Tekton afterwards and eventually cut off all contact with him. Tekton, believing that his safety could not be guaranteed if he wandered around, has since remained by his anvil to improve himself, awaiting Xeric's return so he could serve his master once more.

Tekton is seen working with his magnetic anvil. As soon as someone gets near him, he will notice them and begin the fight. All players should use Protect from Melee when fighting Tekton unless they are confident they can avoid his attacks. Protection prayers do not block all damage, but they mitigate it. He cannot be attacked when he is at his anvil.

Magic and Ranged attacks are ineffective against Tekton due to his high Magic level. Although inaccurate, the Vulnerability spell can still be cast to lower his Defence by 10%. He has very high Defence, so using a crush weapon is recommended against him. High-powered crush weapons like an elder maul are effective, although grouped raids with successful defence debuffs or solo players using Inquisitor's armour should usually not have too much of an issue hitting him.

When he is moving, Tekton will apply rapid stomp damage to players under him. The pillars of smoke around his chamber will lightly damage players if they are on them.

Tekton will emit two different auras beneath him: orange, which is his non-enraged stance; and red, which is his enraged stance. Tekton's overall Defence is lower when he has an orange aura. He is enraged for approximately 15 seconds when returning from the anvil to attack players (except at the start of the fight) after which he reverts to his regular stance. 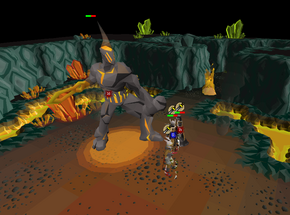 A group of players facing Tekton.

Upon entering, players should all stand on the same space and lure him as far away from his anvil as possible. After being alerted to the team's presence, Tekton will move towards one player. He will stop when he reaches that player and starts attacking them. If a player attacks him he will also stop. Players should then attack and run in a counter-clockwise motion around him, attacking at each turning corner. If Tekton attacks and no players are within melee range of him, he will return to the anvil. Otherwise, he will continue attacking for a prolonged duration before returning back to the anvil. When Tekton returns to the anvil, he heals himself slightly and regenerates some of his lost Defence, targeting each player in the room with two sparks, dealing moderate damage within a 3x3 area. The flying sparks aim at where players are currently standing, so it is best to spread out and dodge the sparks by moving away from where you were standing. When he leaves the anvil, the targeted player should not move, or he will return to the anvil and heal again.

An alternative strategy is to step outside of his melee range between when he starts an attack and when it lands, and stepping back in his melee range to attack. When correctly timed, Tekton will continue attacking instead of retreating to his anvil. Players get a chance to attack every three ticks, so the elder maul or godswords are useful due to their six-tick attack speed.

Due to Tekton being the first room in Challenge Mode raids, it is an ideal place to practice as the boss mechanics can be unforgiving to small mistakes.