From Old School RuneScape Wiki
(Redirected from Teleport tabs)
Jump to: navigation, search
The RuneScape Wiki also has an article on: rsw:Magic tablet

A player using a magic tablet.

Magic tablets are magic spells that are cached in soft clay. This allows the spell to be used later. Clicking on the magic tablet in the inventory activates the spell and breaks the tablet.

A player creates tablets with a marble lectern.

Magic tablets are created from soft clay using a lectern in a player-owned house. A player brings the runes for the spell (elemental staves can be used) and the soft clay to the appropriate lectern in their own or another player's house. By clicking on the lectern an interface will appear showing the magic tablets that can be constructed at that lectern. After selecting a spell, the clay changes into a stackable magic tablet and the magic tablet selection window disappears.

Making magic tablets requires that the player has the appropriate Magic level.

Magic tablets provide players with a method to gain the benefit of a spell before reaching the required magic level to cast it. They are also useful in situations where inventory space is critical and/or where speed of activation is useful. Players on a different spellbook (Lunar magic or Ancient Magicks) may find it useful to have access to a subset of spells from the standard spellbook. 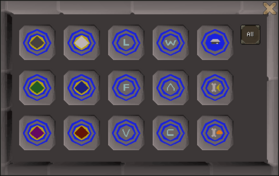 The table below lists all the possible magic tablets. The columns in the table represent the different type of lectern that is required to make a magic tablet. The marble lectern has the ability the create all tablets in one lectern.

The tablets that can be made on each lectern are as follows:

These teleport tablets can be made at the lectern by the altar inside the Jaldraocht Pyramid and can also be bought from Justine's stuff for the Last Shopper Standing for 1 point per 2 tablets. Completion of Desert Treasure is required in order to use them.

The following table shows the materials, costs, and profit made using the Pharaoh's sceptre teleport to craft them.

These teleport tablets are made at a lectern located in the Ouditor's house in Arceuus. Making these tablets require the respective runes and magic levels to create while being on the Arceuus spellbook. In addition, a dark essence block is required to substitute soft clay, which requires 100% Arceuus favour to obtain.

These tablets are either unobtainable, limited to holiday events, or otherwise do not fit in any of the above categories.