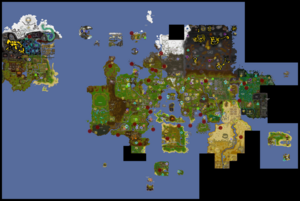 A map of teleport locations.

Teleportation is the instant travel from any location to a specific location elsewhere. Teleportation may be performed by any of the following:

Players who do not have sufficient Magic levels to cast a spell can use a corresponding teleport tablets (see below) from a limited selection.

To teleport other players, they must have Accept Aid on and agree to be teleported.

Players must have completed Desert Treasure to use Ancient Magicks.

Players must have completed Lunar Diplomacy to use Lunar spells.

The pharaoh's sceptre is a rare and expensive item obtained during the Pyramid Plunder minigame based in Sophanem. The sceptre provides three charges (up to eight with the completion of the Desert Diary) of teleports between three pyramids in the Kharidian Desert:

When the sceptre's charges are empty, players may recharge it using the Mummy in the Pyramid Plunder minigame. It is recommended that players use two charges, and teleport to Pyramid plunder to recharge if needed, saving time. In order to recharge, just "use" the sceptre on the Mummy. He will complain about the player owning it, but will go ahead and recharge it anyway. Players will need artefacts from the Pyramid Plunder minigame to recharge the staff - 24 pottery or ivory artefacts, 12 stone artefacts or six (6) gold artefacts are needed.

It disappears afterwards, and it cannot be recharged unless players who have the RuneScape Authenticator active on their accounts show the completed sceptre and a pair of fancy or fighting boots to Solztun to imbue the sceptre, which will increase its charges when any pieces are added and cause it not to break. The sceptre does not work over level 20 Wilderness.

Xeric's talisman is obtained as a rare drop from Lizardmen. It can be charged with lizardman fangs, and extra talismans may be converted into 100 fangs. The talisman holds up to 1,000 charges. The talisman provides teleports to different parts of Great Kourend:

Oldak, a goblin scientist, has been experimenting with runes and has developed Moving-over-distance sphere. The moving-over-distance sphere isn't a perfect piece of arcane technology, though, so it will teleport you to any one of several locations in Dorgesh-Kaan when you break it. If you want a sphere simply take two law runes and some molten glass to Oldak's laboratory in north-west Dorgesh-Kaan and you can exchange them for a teleportation sphere; different locations may be chosen if you've completed a corresponding quest. 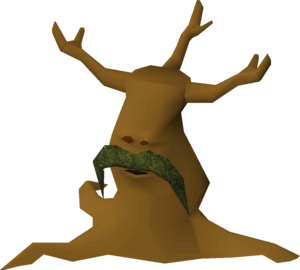 The spirit tree at the Grand Exchange

After completion of the Tree Gnome Village quest, you can use spirit trees to teleport. There are six different spirit tree locations, plus a choice of one player-grown spirit tree. They are:

After completing Tree Gnome Village quest, players can access the spirit trees in everywhere except the Gnome stronghold, which is unlocked after The Grand Tree quest. These will take you to any of the others, including the Gnome Stronghold one. There is also one in Prifddinas, which cannot be arrived at until completion of Song of the Elves quest.

With a Farming level of 83, players are able to grow their own spirit tree. These have the same restrictions as the other normal ones. You may only have one at a time. For more information click here. Additionally, players who have achieved level 91 Farming may grow up to two spirit trees at once and unlimited at level 99. The POH tree does not count for this limit and has an additional requirement of 75 Construction. You also do not require payment, as it is comparatively instant.

After getting permission from the Fairy Godfather during Fairytale II - Cure a Queen, you will find a new network of transportation available to you: fairy rings.

It consists of over 45 fairy rings spread across the land and provides a relatively fast means for accessing often remote sites in RuneScape. Players can enter the fairy ring system from any node while wielding either a dramen staff or a lunar staff, ending up at the master fairy ring in Zanaris. From there, using three letter codes, they can teleport to most rings within the system. Several rings, however, require players to complete quests before they can be accessed. Some locations require a player to enter more than one code in the right order, returning to Zanaris after each trip, but this can be skipped after the first journey to that destination. If the selected code has no corresponding fairy ring, players will be teleported a few squares from the main ring.

The main fairy ring is located in Zanaris, just east of the bank. When you click on it to activate it, you will notice the three mushroom controllers pop up. Each controller has four letters assigned to it. Clicking on the right or left side of a mushroom controller will make it turn clockwise or counter-clockwise, respectively. You can make many combinations from these mushrooms, and click the teleport button to go the location.

Players who have completed the Elite Lumbridge & Draynor Diary will no longer need a dramen or lunar staff.

A player breaking a magic tablet.

Standard tablets can be made at any lectern, for clay and different runes, depending on the tablet. All tablets are members only.

These tablets cannot be made, but they can be bought from the Bounty Hunter Shop or the Grand Exchange.

Basalt, when combined with various salts, can be used to create stony and icy basalt.

On the 2nd floor[UK]3rd floor[US] of the Magic Guild in Yanille (level 66 Magic required to enter), there are three portals that will teleport you to the following locations (note that these are one-way teleports):

The following teleports can teleport players in a single click: