Temple Trekking is a members-only minigame in which the player must escort victims of vampyre rule from Burgh de Rott through Morytania to the Paterdomus, the temple on River Salve, on the way guiding them through bogs and over rivers while defending them from dangerous packs of monsters, some unique to this minigame. (Requires In Aid of the Myreque)

Burgh de Rott Ramble is the reverse route in which the player escorts mercenaries from the Paterdomus to Burgh de Rott. (Requires Darkness of Hallowvale)

The difficulty of either minigame is determined by whether the player chooses weaker or stronger people (called followers) to escort and whether the player chooses to take easier or harder paths through Morytania. Escorting weaker followers means a greater number of monsters will attack when a monster attack event occurs. Taking harder paths means the monsters will have higher combat levels when a monster attack event occurs.

These two activities provides opportunities to cross-train in most skills. Combat experience (including Prayer) is gained during battle events. Monster drops and minigame rewards provide some of the staple materials used in Crafting, Cooking, Farming, Fletching, Herblore, Runecraft, and Smithing, while tomes of experience can be awarded for Agility, Firemaking, Fishing, Mining, Slayer, Thieving, and Woodcutting. Players can also pick up pieces of Lumberjack clothing, which are found only in this minigame.

Since the player loses if the follower is killed, one basic tactic in most combat events is for the player to shield the follower from the monsters. This means the player's body will typically be a meat-shield between fairly strong melee enemies and the follower. There are two practical strategies to achieve this:

Please note that players may not take any cat into this minigame.

There are several ways to reach Burgh de Rott quickly, where the minigame may be started. Some of these include: 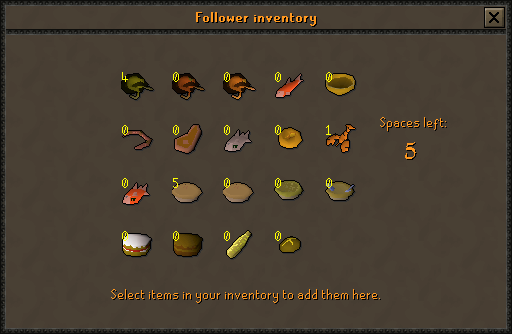 It is a good idea to fill their pack before starting a trek, while talking to them, and before agreeing to escort them.

To fill their pack, use a food item on them. They will "open their backpack" which opens the Follower Inventory, and complete list of food items they will accept and spaces remaining. It is not possible to see what they already have in their pack, only how many more items that can be given. The follower inventory can only be filled with the items listed below before the trip. If desired, food can also be taken back out if it has just been put in.

After giving food to the follower it is recommended to then return to the bank to retrieve additional food for the trip. Once ready, restart the dialogue and agree to escort them.

Your follower will lose all of their food if you use the escape option to leave the event or if you teleport out of the minigame. (Completing the event or using the evade option to evade an event does not cause follower food to be lost.)

The following quests must be completed to play this minigame:

Temple trekking starts at the town of Burgh de Rott. Start the minigame by speaking to one of the NPCs standing nearby.

Burgh de Rott Ramble starts on the east side of the River Salve just outside the temple. A player can start at either side.

During treks it is recommended, but not necessary, to have full prayer points. Certain monsters in the events can hit hard (so Protect prayers come in handy). Also, you need prayer points to collect items for druid pouches, if you need any. The Paterdomus temple and Nature Spirit altar are quite close by to the start of each route. Prayer potions can be used too. However, higher-level players who have brought the correct equipment should have little need of prayer though it does make it safer and easier for lower-level players.

Unless you are wearing an Efaritay's aid, Vampyre Juvinates can only be harmed by relatively weak silver weaponry. Because of this an Efaritay's aid is strongly recommended. A dragon defender will greatly increase accuracy against Juvinates if using a one handed weapon.

The people to escort are divided into 3 groups: easy, medium and hard. The followers on Temple Trekking are clothed in colours that intend to show their difficulty, while the followers on Burgh de Rott Ramble are dressed to resemble typical player characters and their likely abilities. In combat and campsite events, the number of monsters faced (or people helped) are determined by which follower is escorted. Easy/strong followers have 3, Medium have 4, and Hard/weak have 5 or 6. The number of monsters a player defeats on a Trek or Ramble will largely determine the size of reward. 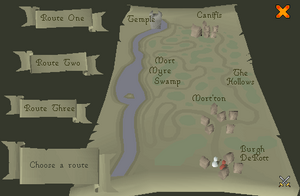 Citizens of Burgh de Rott and the mercenaries of Misthalin can be escorted by 3 different paths, the main difference being the combat level of the monsters faced. Depending upon combat level and available gear, choose an appropriate path.

There are 3 different types of events that might happen when you're moving forward. Each path has a different amount of spots where an event may occur. Once an event occurs, the player and follower are pulled into the event area. The player will start in front of a section of path with blue stones. Right-clicking will display an Escape option, which abandons the trip and leaves the player in the middle of the swamp normally. At the opposite end of the area is the path that allows the player to "Continue-trek", once the event is completed. In combat events on the easy and medium routes, there are paths that evade-event that when used will skip the event and continue trekking, adding no reward and increasing the chance for another event. On the medium route, 50% of the monsters must be killed before being able to use Evade-event. 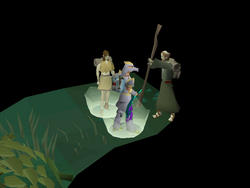 A player and his escort are healed by Abidor Crank.

A man named Abidor Crank will appear as an event and heal you and the follower, boosting your Defence level by 10 and your Hit points by 15. He also turns all Rotten foods into Stews.

In combat events a certain number of enemies will attack player and escort. For most of the combat events, the monsters give a few seconds before attacking. This is the player's chance to position themself between the follower and the monsters. All combat events are multi-way combat. Combat events provide the majority of the end reward when completed.

There are four different types of puzzle events.

After successfully completing a trek, the follower will give the player a Reward token. These tokens can be blue, yellow, or red, depending on the chosen route. The reward amount is determined by how many monsters are fought, what level they were, and how many puzzle events were completed, as explained below. The token given can be exchanged for the reward anywhere.

This table shows the max reward possible on any trek for each item. The player may select from any of the following rewards:

The player may select a Tome of experience as one of the rewards. These tomes give some experience in one of the following skills, chosen at random when the tome is selected: Agility, Thieving, Slayer, Firemaking, Fishing, Woodcutting, or Mining. Each tome has a fairly high value for alchemy (2000 for low alchemy, 3000 for high); tomes for undesired skills may be better used to this end. The colour of the tome is the same as the colour of the reward token used.

The rewards above are distributed based on the difficulty of the Trek. Trek ratings are theoretical numbers, as there is no display in game to show how a Trek is rated. Assuming that when less than the maximum reward is given, a certain percentage is given according to a rating accumulated on a Trek, and that any rating in excess of 100 will result in a 100% reward is received, then each event adds the following amount to the Trek rating.

It is possible (and common) to exceed a 100 Trek rating on Route 3, and even a 200 rating with the hardest combination. However, there is no extra reward for exceeding a 100 rating. A case study of 30 Treks shows that guiding the strongest followers on Route 3 tends to average a Trek rating of 89.9, with a reward average of 88.0% when excluding Tomes of experience, and an expected reward value of 82.3% had those tomes been measurable rewards. The approximate market value of the rewards totalled 786,000 coins, with 23,843 experience from tomes.