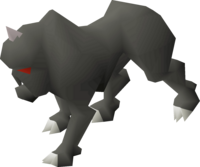 The Temple guardian (also known as Cerberus, thus sharing the same name as the hellhound boss, Cerberus) is a dog-like monster that dwells in the entrance of the underground passageway to Canifis.

Players are required to kill the Temple guardian in the Priest in Peril quest. Magic or a cannon cannot be used to kill it. However, level 3 skilling pures can bring an inventory of saradomin brews and rings of recoil to slowly kill it without gaining combat xp, though at least 1 damage must be dealt by the player for the kill to count.

It is considered a dog in regards to Slayer tasks.