The Temple of Ikov is a dungeon underneath Hemenster. The Temple of Ikov quest does not need to be started to access the dungeon, however a pendant of lucien is required to pass through the gates north-west of the southern entrance. The main entrance to the dungeon is located south of the Ranging Guild and secondary entrance inside the house in McGrubor's Wood requires a shiny key.

The two entrances to the dungeon.

You can also pick up the Boots of lightness in here if you have lost your pair (bring a light source and slashing weapon). This is also where the Staff of Armadyl was located.

The Temple of Ikov is the site of the only remaining temple of Armadyl in Gielinor, and is inhabited by the Guardians of Armadyl. The guardians serve to protect the Staff of Armadyl, a very powerful staff used by Zamorak to banish Zaros at the end of the Second Age.

During the Temple of Ikov quest, the player is employed by Lucien to steal the staff from the temple, although the player is later given the choice to either aid the guardians or Lucien. Despite what the player chooses to do, the staff is later stolen anyway by Movario.

The music track that plays in the temple is "Chain Of Command". 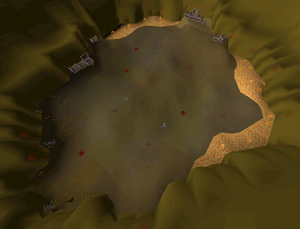 The former KBD Lair, visible by using the oculus orb.