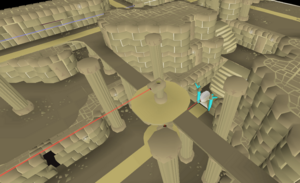 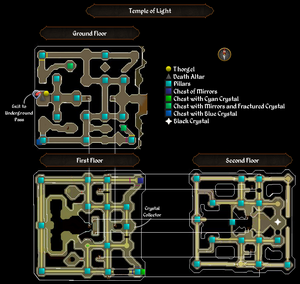 The Temple of Light is an ancient structure built by elves to protect the death altar. The temple can be found under West Ardougne at the end of the tunnels leading from the Mourner's HQ, and is accessed during Mourning's End Part II.

The Mourners will do anything to get their hands on this place, possibly so they can destroy it and/or get a large supply of death runes for their evil purposes, or to gain access to something unknown around the underground pass and the temple. It is eventually revealed that the Iorwerth Clan are attempting to gain access to the Temple so they could use it, as an ancient elven power source, to speed the return of their Dark Lord.

The temple is a complex maze, with the manipulation of light being necessary to proceed. A Crystal trinket is required to enter after the quest is complete, which can be obtained from Arianwyn on the ground floor of the altar in Lletya, or can be found in the chest in that same location after starting Song of the Elves.

The temple is swarming with level 73 Shadows that can easily hit 13s. Players may also find dark beasts east of the entrance, which require 90 Slayer to kill. Located in these tunnels is also a single runite rock at the Mourner Tunnels mine.

Mourner gear is required to enter through the front door in West Ardougne since it is in the basement of Mourner's HQ (unless the player has completed Song of the Elves). If the player has completed Mourning's End Part II, the new key is required to enter the dungeon from the basement; it can be found on the Head mourner's desk in the basement. After the quest is complete, you'll need the Crystal Trinket from Arianwyn on the ground floor of the altar in Lletya to re-access the dungeon. After Song of the Elves, it is instead found in a chest on the ground floor.

Alternatives without Mourner gear would be to go through:

Players then proceed to the dwarf camp at the southern wall, and use the tunnel to the death altar. The player can also enter the Abyss, go to the death rift, and then use the portal to teleport next to the altar.