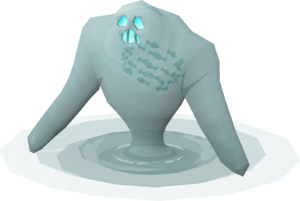 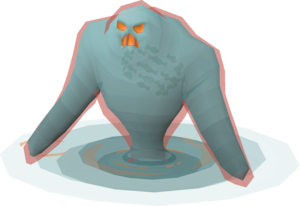 Tempoross is a minigame-style boss that is fought using non-combat skills. Also known as the Spirit of the Sea, it is an ancient entity believed to be as old as Gielinor itself. It is able to create intense storms that make sailing difficult, and has recently awoken after having laid dormant for centuries, wreaking havoc upon sailors who were unfortunate to cross its path in the seas.

The Spirit Anglers, a group of fishermen from Al Kharid, have established a port at the Ruins of Unkah in the southern desert to investigate the reason behind its sudden resurgence and to create safe passage through the seas by keeping it subdued. In order to help them subdue Tempoross, players must have at least level 35 in Fishing.

Tempoross is considered a boss and not a minigame. Therefore, while players take no damage directly from Tempoross or the surrounding environment, the normal rules relating to the loss of items still apply, and Hardcore Ironmen will lose their Hardcore status if they die while fighting Tempoross (e.g. from poison).[1]

Followers and pets (Eg. Kittens, Cats) are allowed in Tempoross, and the fished harpoonfish can be fed to kittens when hungry.

There are several ways of reaching Tempoross. Beware of desert heat while travelling there. These options, ordered from fastest to slowest, are:

Using Ferryman Sathwood's boat, south of the Al Kharid bank. This will bring the player directly to the Tempoross docks. 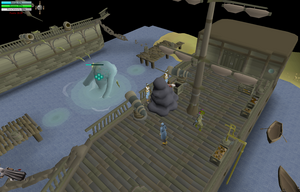 Players can begin the encounter by boarding the ship located at the end of the dock in the Ruins of Unkah. Tempoross can be fought alone or with a group. Captain Dudi announces a countdown for when the next encounter will depart; however, the boat will leave immediately if the maximum number of players allowed in one encounter is reached.

Multiple instances of the encounter can run simultaneously, so players will not have to wait for an in-progress encounter to return before a new encounter can begin. The boss fight scales by the amount of players and combined fishing levels. Doing it solo or in smaller groups mostly does not put you at a disadvantage. However, with fewer players, fires will be harder to put out.

After the ship departs, players will arrive at Tempoross Cove on board one of two ships, both of which are identical in function and role in defeating Tempoross. A selection of equipment, including ropes, buckets, hammers, and harpoons are available from the crates on deck should the player have lost or forgotten any items.

Players must help the anglers subdue Tempoross by draining its essence to zero. To do this, players must first deplete its energy by firing cannons found on the decks of both ships, using harpoonfish as ammo. The fish are gathered via harpoon spots found in the waters around the island and can optionally be cooked to deal more damage. Occasionally, a fishing spot will have jumping harpoonfish. Fishing at these spots allows for the chance of catching two harpoonfish at a time. Raw harpoonfish drain 10 energy per fish, while cooked fish drain 15 energy per fish.

Once its energy is depleted to zero, Tempoross will submerge and the second phase of the fight will begin. During this phase, players must catch the energized fish from Tempoross by fishing at the whirlpool at the end of each dock. Doing so will reduce its essence. If the essence depletes to zero before Tempoross has fully restored its energy, it will retreat and the encounter will be successful. However, if Tempoross fully regains its energy before its essence is fully depleted, it will emerge and the first phase of the fight will repeat again. Any essence depleted from Tempoross in the second phase will remain depleted. This cycle can be repeated up to three times, after which Tempoross will gain too much energy, and the encounter will end unsuccessfully.

If the encounter is successful, the player will be automatically sent back to the Ruins of Unkah after approximately 20 seconds. Players can skip the wait by using the right-click leave option on any of the NPCs around the Cove. 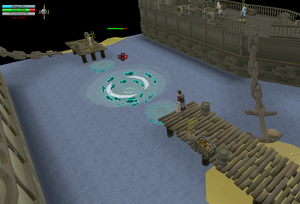 During the fight, Tempoross will attempt to disrupt the player's efforts by unleashing an array of attacks. These attacks do not deal any damage; rather, they hinder the player's movements and can cause players to lose some of the fish and tools gathered during the encounter. Tools that will not be lost to any attacks are the Imcando hammer, Barb-tail harpoon, Dragon harpoon, Infernal harpoon, and Crystal harpoon (along with any respective cosmetic variations).

A charged torrent of water surges towards a nearby cannon...

Not cooking the harpoonfish means getting lower amounts of points/loot but significantly more exp. With Crystal harpoon and a fishing level near 99, this is the fastest experience in the game if not using tick manipulation methods. With no crystal harpoon or if not near level 99 fishing, drift net fishing will yield higher experience rates. It is recommended for non-iron players to not cook the fish as the boss is meant for fast experience rates and is not as reward heavy as others.

Cooking the harpoonfish means lower experience rate but significantly more points and, therefore, loot. It is recommended for iron players and pet hunters to use the infernal harpoon when they reach the level requirements.

During the fight with Tempoross, players will primarily gain Fishing experience, with additional opportunities to gain experience in Cooking, Construction, and Strength. Unlike Wintertodt, no experience is awarded upon Tempoross' defeat. Using a small or big fishing net, the debris left behind by Tempoross can be looted from the reward pool at the Ruins of Unkah. Players will receive one reward permit for the first 2,000 points and additional permits for every 700 points beyond 2,000. Any remaining points award a linearly scaling chance for a final permit. Up to 8,000 reward permits can be stored in the pool.

The debris can contain some unique rewards: