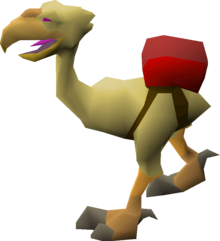 Terrorchick Gnomes are gnomes mounted on young terrorbirds. Unlike adult terrorbirds, terrorchicks are used for non-military riding, particularly the delivering of food.

Several terrorchick gnomes can be found beneath the Grand Tree in the Tree Gnome Stronghold. If a player activates a reward token received from the Gnome Restaurant minigame, a terrorchick gnome will soon arrive and give them a random gnome cuisine and drink.