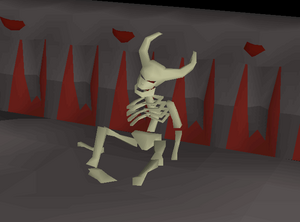 Thammaron was an elder demon and the chief lieutenant to Zamorak and a major ally of his who helped him to overthrow Zaros. During the God Wars, Thammaron and his mighty army attacked Uzer and destroyed it, but not before being mortally wounded by the elite guard of clay golems in the process. After the battle, Thammaron retreated to his own plane, where he later died of his injuries.

Thammaron once had a sceptre, which is now a possible drop from revenants. It gives a significant boost in Magic accuracy and damage when fighting monsters in the Wilderness. 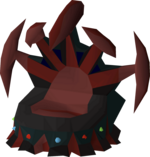 Thammaron supposedly came to Gielinor during the Second Age, presumably alongside many other demons to support Zaros and the Zarosian Empire. At some point he had the demon Alathazdrar as his servant. Thammaron became chief lieutenant to the Mahjarrat Zamorak, the highest general in the Zarosian army, to whom Thammaron became very loyal. Thammaron would eventually assist Zamorak in his rebellion against Zaros.

Following Zamorak's ascension, banishment and later return Thammaron continued in his service for several millenia throughout the God Wars. Thammaron's last battle was against the city of Uzer, a desert city on the east coast of the Kharidian Desert allied with Saradomin. Thammaron's army's first assault on the city was a failure as the city's clay golems were capable of defending the city. Thammaron then hatched a plan and returned to his throne room in the Infernal Dimensions from where he opened a portal to Uzer's undercity. The resulting battle completely destroyed Uzer, but with huge losses on both sides. Thammaron was mortally wounded and retreated back to the Infernal Realms, where he later died from the wounds.

Millenia later an adventurer visits the ruins of Uzer and meets the last remaining clay golem from the fight against Thammaron and reactivates the portal leading to the Infernal Realms, where they discover the remains of the long-dead demon.