Thammaron's sceptre is a magical sceptre once owned by Thammaron, a Tsutsaroth demon who was once one of Zamorak's most trusted allies during the reign of Zaros and later one of his key generals during the God Wars. It can be received as a drop from revenants found within the Revenant Caves. This item counts as a Zamorakian item in the God Wars Dungeon.

The sceptre requires a Magic level of 60 to wield, and shares the same bonuses as the master wand, although it cannot autocast Ancient Magicks. It also has a powerful passive effect within the Wilderness when charged with revenant ether. 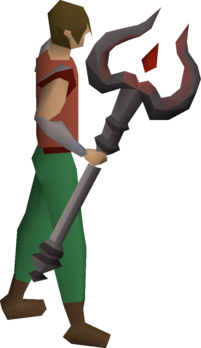 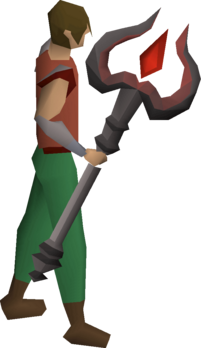 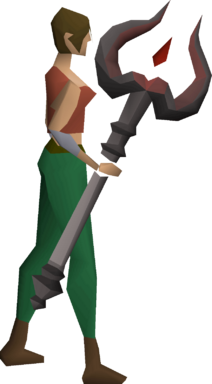 When Thammaron's sceptre is charged with revenant ether, an additional 100% magic accuracy and 25% magic damage boost is applied when attacking any NPC in the Wilderness, consuming 1 ether per attack whether the player hits or not.

This effect will stack with a slayer helmet or a salve amulet and their variants, but not both simultaneously. This makes the sceptre the best magic weapon in the Wilderness, surpassing the damage output of a trident of the seas (and its swamp variant) with the additional capability of attacking any hostile players, something which both tridents are incapable of doing.

In order to use the sceptre's passive effect, it must first be activated with 1,000 revenant ether (costing 174,000). The 1,000 ether used to activate the sceptre does not count towards the usage of the passive effect, thus additional ether must be added (up to 16,000) in order to increase the sceptre's damage output. The hourly cost of constantly using this weapon to cast spells is 1,200 ether or 208,800, as spells can only be cast every 5 game ticks.

The ether can be safely removed by selecting the right-click Uncharge option on the sceptre, after which the sceptre becomes tradeable again.

Upon death within the Wilderness, any revenant ether stored within the sceptre will always be dropped, even if it is one of the player's protected items. Because of this, despite the sceptre being able to store a maximum of 17,000 revenant ether, it is recommended to store the minimum amount required for a trip into the Wilderness (in addition to the 1,000 ether required to activate the weapon).