The Ascent of Arceuus is a quest in the Great Kourend quest series which focuses on Arceuus.

{"requirements":"*Completion of the following quests:\n**[[Client of Kourend]]\n***[[X Marks the Spot]]\n*<span class=\"scp\" data-skill=\"Hunter\" data-level=\"12\">[[File:Hunter icon.png|21x21px|link=Hunter|alt=Hunter]] 12 [[Hunter]]</span> <sup>(<span title=\"This requirement is not boostable\" style=\"cursor:help; text-decoration: underline dotted;\">not boostable</span>)</sup>\n*20% [[Arceuus]] [[favour]]","desc":"A long time ago, the citizens of Arceuus house gave up their human bodies and claimed immortality. This event was known as the Ascent of Arceuus and it marked the end of death within Arceuus house. Or so they believed. For the first time in a thousand years, a member of Arceuus house has fallen. You will need to solve the mystery of this death. However, time is of the essence and the fate of Arceuus house lies in your hands.","difficulty":"Intermediate","kills":"*5 [[Tormented Soul]]s (Level 16)\n*[[Trapped Soul]] (Level 30)","name":"The Ascent of Arceuus","start":"Speak to [[Mori]] in [[Arceuus]].","length":"Short","items":"None<br/>"}

Speak to Mori who is north of the pub in Arceuus. Upon speaking with her, a shocked Mori tells you that her friend, Thana, has died. This is considered impossible, as Citizens of Arceuus had achieved immortality a thousand years ago during an event known as the Ascent of Arceuus. She asks you to seek help from David Andrews, the leader of the Kourend Council, the current ruling authority of Great Kourend.

Travel just south-west to Kourend Castle and speak to Councillor Andrews on the 1st floor[UK]2nd floor[US]. He will tell you that the Arceuus family have chosen to keep their knowledge secretive, and thus the Council cannot lend their assistance.

Return back to Mori and tell her that the Council will do nothing to help. Mori informs the player that the Council doesn't often provide help and actually were never meant to rule the Kingdom. She suggests that if the Council won't help, maybe Lord Arceuus will, as she guesses that he will not be able to ignore a death among his own people.

Walk north-west to the Tower of Magic, just west of the Arceuus Library. Speak to the Tower Mage outside the doors and inform them that there has been a death in Arceuus. They say that the tower has been experiencing issues, but as your investigation may be linked to their problems, they allow you to enter.

Head upstairs and speak with Asteros Arceuus, the son of Lord Trobin Arceuus. He will tell the player that a short while ago, their instruments detected fluctuations in power from the Dark Altar, causing them to feel a strange loss of power, as if the Altar itself had failed altogether.

After realising this, Lord Trobin Arceuus used himself as a conduit to channel what little power the Dark Altar had left. This failure of the Dark Altar is what caused the experimental trapped souls to break free and turn feral, and caused Thana's death. Lord Arceuus' power is the only thing keeping his people alive.

Asteros reveals to the player that his father isn't the one who discovered the knowledge of immortality, despite the belief by most that he did. Rather, the knowledge was given to him by three volcanic creatures known as the Tasakaal. These ancient beings reside in the sulphur volcano of Mount Karuulm and possess far more knowledge of the Dark Altar than anyone else in Arceuus. Asteros will ask that you contact them to find a way to restore power to the Dark Altar. 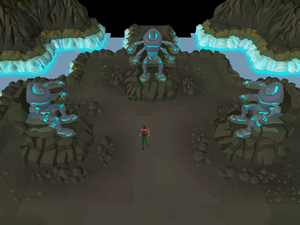 Make your way over to Mount Karuulm, which can be quickly accessed with the fairy ring code CIR or by using a Battlefront teleport. Having 62 Agility will make navigating the mountain slightly easier and quicker.

Hint: West of the entrance to the dungeon, down the mountain, is a mine containing some iron rocks that can be mined to complete a task in the easy Kourend & Kebos Diary.

Enter the Karuulm Slayer Dungeon on the mountain's summit via the elevator; you do not need to bring foot protection. Speak to one of the three Tasakaal; they will initially dismiss you, but will listen to you after hearing the name "Arceuus". They will tell you that Trobin came to them long ago, pleading to help his dying wife. They granted him the knowledge of immortality, but he misused it to grant the entire people of Arceuus immortality, upsetting the balance of the world: "For every death, there must be life. For every life, there must be death. Perfectly balanced. As all things should be." Thus, they will refuse to help the Arceuus, as their time has long been overdue.

After offering to help the Tasakaal in exchange for saving the people of Arceuus, they will admit the Arceuus' work with souls has been useful in helping to maintain the balance. The Tasakaal will agree to help you, provided that you help them with a task of their own. They will tell you to free a trapped soul in a grave south-east of the mountain before they will assist you. 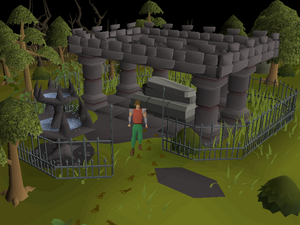 The ancient grave the Tasakaal mentioned to you.

If you have a second Battlefront teleport, use it to directly arrive at the Ancient Grave. If not, leave the mountain and head south-east of the mountain to get to it. Inspect the ancient grave and follow the tracks by inspecting the plants to the end east of the Farming Guild (note: inspect the plants that the tracks follow), where a Trapped Soul will attack. Make sure to inspect each plant on the pathway there to reveal the footprints or the trapped soul will not appear. Importantly, the soul pops out of a bush, by running to the other side the Trapped Soul is safespottable. The Trapped Soul will crawl back into the bush if you run out of sight of it. The Trapped Soul will disappear if you take too long to kill it, making this fight tricky for very low levels.

Once the soul has been disposed of, return to the Tasakaal. They tell you that they have found the cause of the problem; the Dark Altar is working as normal, but someone has placed a device to redirect its power to a construct nearby.

Head to the Dark Altar, north-east of the Arceuus Library. You can use the fairy ring code CIS if it is repaired, a games necklace to Wintertodt, or an Arceuus library teleport tablet. Inspect the rocks around it until you find a strange device, which you automatically smash. Return to the Tower of Magic, and speak to Lord Arceuus to complete the quest. He will be concerned that someone has deliberately tried to sabotage the Dark Altar and that he has sent researchers to find out how the device works, thanking you for saving his people. 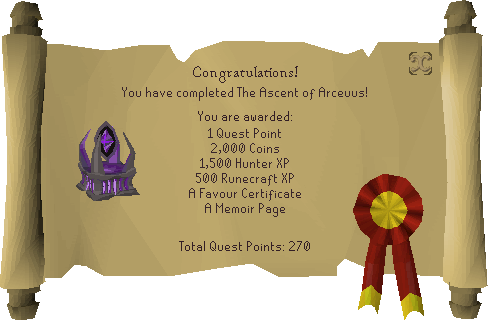 Completion of The Ascent of Arceuus is required for the following: