{"requirements":"","desc":"From the newly revealed town of Corsair Cove, deep in the south of Feldip Hills, the captain of the Corsairs has sailed to Port Sarim seeking help. His crew is sick, and he suspects that a curse has been laid upon them.\n\nIf you can unravel the fearful and conflicting tales of ogre relics, vengeful mermaids and demonic possession, maybe you can help his ailing crew overcome The Corsair Curse.","difficulty":"Intermediate","kills":"[[Ithoi the Navigator]] (level 35)","name":"The Corsair Curse","start":"Speak to [[Captain Tock]] at the crossroads north of [[Port Sarim]].","length":"Short","items":"* [[Spade]] (obtainable during quest)\n* [[Tinderbox]] (obtainable during quest)"}

Speak to Captain Tock at the crossroads just north of Port Sarim. He will tell you that his crew of Corsairs has been inflicted with a curse and asks for your help. After you agree to help him, a brief cut scene will show you where you can find the boat (the dock at the western end of Rimmington). Speak to Captain Tock again on the dock to sail to Corsair Cove.

There are four crew members to speak to: Ithoi the Navigator, Arsen the Thief, Cabin Boy Colin and Gnocci the Cook. Refer to the map for their exact locations (note: they are each upstairs in their huts, you need to climb the stairs for each of them).

A map of all the important locations visited during the quest.

If you haven't obtained a spade and tinderbox already, a tinderbox can be found beside Gnocci the Cook and a spade can be found planted in the sand under the big Tropical Tree south-east of Gnocci the Cook's hut, near the rocks (does not appear as a red dot in mini map). Note: The bank (run by Yusuf) will not be accessible until this quest is completed.

Visit Ithoi first in his hut (as the other three crew members will simply instruct you to talk to Ithoi), located upstairs in the large hut south-west of Corsair Cove. He will claim it is a curse and that there are many things that can cause them.

After talking to Ithoi, investigate what may have caused the curse by speaking to Arsen, Colin, and Gnocci in any order; each will tell you they caused the curse with various events that occurred to each respectively. Each crew member's claim will need to be investigated further.

Arsen the Thief was asked by Captain Tock to explore some caves west of the cove. He was immediately spotted by the ogres as he climbed down, and in a panic, grabbed some loot and quickly escaped. He believes he may have stolen a sacred relic and the shamans have cursed his crew for stealing it.

Speak to Captain Tock located on the ship and ask him for the relic. As he has no use for it, he gives you the ogre artefact.

Head west of the cove and down the hole into the Corsair Cove Dungeon. Speak to Chief Tess at the entrance. She will tell you that he simply grabbed one of her many tooth-picks and that her shamans have not cursed the crew.

Return to Arsen to explain what actually happened. Arsen is assured that the curse was not his fault. 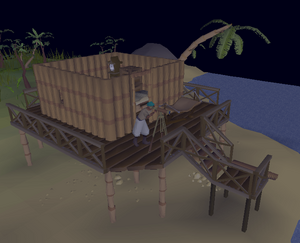 Cabin Boy Colin believes he may have offended a mermaid after he saw one using Ithoi's telescope. He thinks perhaps the mermaid didn't like strangers shouting about her appearance and blowing kisses at her and she cursed the crew as a result.

Use the telescope in Ithoi's hut and discover that the mermaid Colin was referring to is an ogre called Bugs. If you have completed Big Chompy Bird Hunting, you will recognise him as Rantz's son.

Return to Colin to explain what actually happened. Colin is assured that the curse was not his fault. 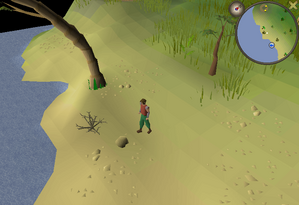 Gnocci the Cook will tell you that while fishing for food, he discovered "Her", a doll possessed by a demon, and buried it next to the tree where he was fishing. He believes that this demon cursed the crew and asks you to kill it.

Dig by the lump of sand to the far west of Ithoi's hut (just west of the fishing spot) where he buried the doll during the cutscene. You will discover it is a clockwork toy doll. If you have at least level 18 Crafting, you will also say that you know how to make a doll just like it.

Return to Gnocci to explain what actually happened. Gnocci is assured that the curse was not his fault.

Traitor in the midst[edit | edit source]

At this point your quest log should end "I had[sic] ruled out all the corsairs' theories about how they had become cursed"; if not, repeat your conversations with each corsair as needed.

After debunking Arsen, Colin, and Gnocci's "curses", return to Captain Tock on the boat. He will explain to you that the curse began when he and Ithoi went away for a parlay and returned to find their crew sickly after eating dinner, with Ithoi shortly falling ill as well. As Ithoi was with Captain Tock at the time, he rules out the food as the cause of the curse.

Speak to Gnocci. You discover that he didn't cook dinner that night, as he was still traumatised from the "possessed" doll. He tells you that Ithoi cooked dinner that night instead before leaving for his parlay with Captain Tock. He will also rule out the food as the cause of the curse.

Next, speak to Arsen. He will reveal that his brother, Francois, told him that Ithoi may be dismissed from Tock's crew, as they have settled in the Cove and no longer need a navigator.

Now, speak to Ithoi. Tell him that you heard of him cooking the meal that made the crew sick. He will believe you are accusing him of poisoning his crew and asks why you would think so. Tell him it is because the Captain is thinking of firing him and he will confess to the crime. With the crew believing they were cursed, they would want Ithoi to stay on the crew. 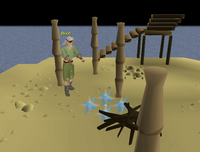 Ithoi runs out to extinguish your fire, proving that he is faking the curse.

Speak to Ithoi again and tell him you know the curse is fake. He will tell you he will not get up thus being unable to prove he is faking his illness. Leave the hut and use the tinderbox on the driftwood beneath Ithoi's hut. Ithoi will get up and run outside to douse the flame with magic. Return to Captain Tock, and tell him Ithoi is behind the curse. Outraged, Captain Tock will ask you to kill Ithoi. 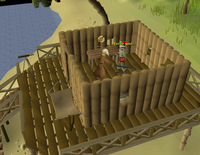 Return to Ithoi's hut and he will attack you immediately. He is level 35 and uses elemental strike spells. He can also use the Curse spell. Lower levelled players should prepare for this fight, although he does splash quite often. Make sure that if you are using range attacks, that you are comfortable losing the arrows or bolts that you use while fighting Ithoi. They will disappear at the end of the fight.

After killing Ithoi, leave his hut and return to Captain Tock. Captain Tock will ask what is happening now. Explain to him that Ithoi was killed for poisoning his crew. He will thank you and allow the crew members to rest and get better. He will also mention that he will speak to Yusuf, located in the bank north of the ship, allowing access to bank on the cove. 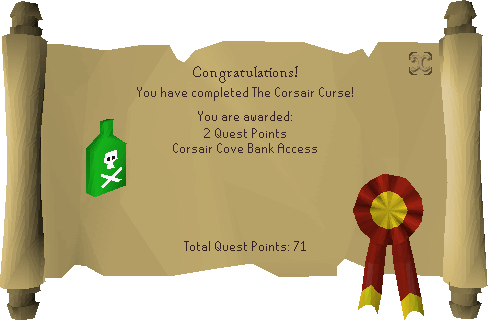