The Depths of Despair is a quest that follows on from Client of Kourend in the Great Kourend quest series. It was announced on the 9th of October 2017 and polled as part of the Old School Content Poll #57.

Speak to Lord Kandur Hosidius in the house north-west of the Hosidius Vinery (Using option 2 on Xeric's Talisman teleports you close to him). He tells you that his eldest son, Artur Hosidius, has gone missing, and that they are desperate for help in finding him. Select chat options 2 and 1 to agree to help him, and he will ask you to begin by talking to his family and servants.

Speak to Chef Olivia in the kitchen. Olivia reveals that she and Artur are lovers, that he told her he was looking for the original copy of the Accord of Twill, and that he has been spending a lot of time researching in the Arceuus Library. She refers you to a librarian, Galana, who might be able to help you.

The Envoy to Varlamore[edit | edit source]

Travel to the Arceuus Library; a fairy ring can be found nearby for those who have paid Trossa 80,000 coins to restore it (code: CIS). Speak to Galana, who is found in the north-eastern segment on the ground floor. She will suggest you find a book called Varlamore envoy, the location of which is random for each player. Ask her where it is and search the bookcases in that area until you find it—each square in game is its own bookshelf, so be thorough. If you log out before finding the book, make sure to speak to Galana again, as the location may have changed. Read the book, and you will discover that the original copy of the Accord was lost at sea, and that the ship carrying it sunk into the Crabclaw Caves, whose entrance is found south of the Woodcutting Guild, marked with the

icon. (If you don't read the book, a message saying "You have no reason to go in there." will appear in the chat when you try to enter the Crabclaw Caves.) Skill necklace teleport to Woodcutting Guild or row boat to land's end.

The location of the cave's entrance.

The entrance to the Crabclaw Caves.

Make your way into the Crabclaw Caves (not Crabclaw Isle) by heading south from the Woodcutting Guild. Follow the path east, then south through a crevice. Follow the path over the Stepping Stones and through the rocks. If your Hitpoints level and Agility level are both low, you might want to bring some food in case you fall while attempting to cross the stepping stones or rocks, and for the upcoming fight.

Note: Killing a Sand Crab is an Easy Task in the Kourend & Kebos Diary. 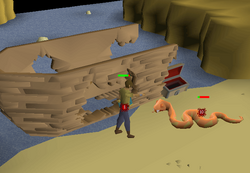 The player fights the Sand Snake.

At the end of the caves, climb down the tunnel entrance to find Artur Hosidius. He believes the chest further ahead contains the original Accord, but it is guarded by a Sand Snake. As he is not good at fighting, he asks you to kill it for him. Climb the rocks ahead, and kill the Sand Snake. It is weak to magic, so magical attacks are recommended to kill it quickly. Once you have killed the Sand Snake, search the chest, which contains the original Royal Accord of Twill. 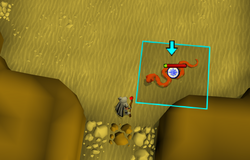 Return to the Hosidius family's house, and speak to Lord Kandur. He will take the Accord, and give you your reward. 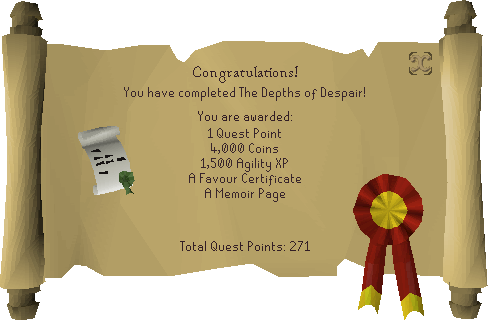 Completion of The Depths of Despair is required for the following: