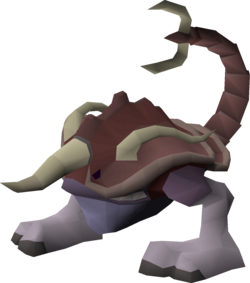 The Everlasting is the second boss fought in the quest Dream Mentor. This monster has fairly high Defence against melee and Ranged, but no Magic defence, so players should use Magic e.g. trident of the seas or Iban Blast in order to kill it effectively. It can be safespotted using the lectern to the north. After this monster is killed, it transforms into its third form, The Untouchable.

The Everlasting, along with its next form, is one of few monsters in Runescape that the player cannot walk through. Be warned that it is possible to get yourself trapped by the edge of the arena next to the lectern, particularly when trying to set it up for safespotting. If this happens you are forced to either tank the damage it deals or escape using the lectern.

Note: Prayers cannot be utilised in this battle or any of the others before or after it. Should players die or choose to leave during the middle of the fight, they must start the entire battle over from The Inadequacy.

It can be fought in the Nightmare Zone after the quest is complete. Be careful if selecting the everlasting in a hard rumble for practicing magic, because it has a strong invisible damage reduction against magic.