From Old School RuneScape Wiki
Jump to navigation Jump to search
The RuneScape Wiki also has an article on: rsw:The Eyes of Glouphrie

The Eyes of Glouphrie is a quest revolving around yet another plot against the Grand Tree gnomes, this time not by Glough, but a much more feared figure from gnomish history.

Head south-west from the Spirit Tree in Tree Gnome Stronghold until you see a dungeon entrance marker near the edge of a small lake. Enter the cave, and speak to Brimstail. Ask him about the cute creature wandering around, and then agree to let him tell you about his research. He will offer to tell you some history - agree and say that you love a bit of history (the second option does not work to skip the dialogue). You will then be given the option to start the quest.

Brimstail will ask you to go into the next cave and look at it carefully. Inspect the singing bowl, set in the centre of the cave surrounded by a black circular pothole, and select 'Look-at" on the machine panel next to Oaknock's exchanger; then, hit 'Unlock' (attempt to) Oaknock's Machine. Once you're done with these three actions, in that order, talk to Brimstail again.

Talk to Brimstail again, and he will tell you to go and talk to Hazelmere. Fully finish the dialogue or Hazelmere will not be understood later on. Hazelmere is located on the island chain east of Yanille, there is also a fairy ring directly beside his hut code CLS. You can also use the Watchtower Teleport spell and run east. Another way to reach him is by using the Nightmare Zone minigame teleport and running south-east.

Speak to Hazelmere, located east of Yanille. There's a long conversation, and he will get inside your mind where you can now talk to him. This requires 46 Magic and cannot be boosted. A long cutscene will follow showing the battle between the gnomes and goblins, with King Healthorg, Oaknock, Glouphrie and Hazelmere fighting alongside. Glouphrie uses his magic to scare away the goblins, and later uses his magic to cover up Argento's death. Oaknock then builds a machine that reverses Glouphrie's magic, revealing that Argento is actually dead to the King. The King, unable to trust Glouphrie, banishes him from the Stronghold, which Glouphrie isn't happy about. Hazelmere will then give you a violet pentagon for the machine. 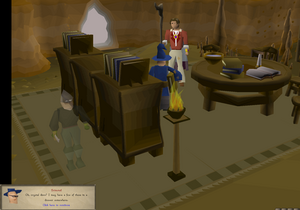 Someone sneaks in during the conversation with Brimstail...

Go back and speak to Brimstail where you will see a shorter cutscene in which an invisible gnome will sabotage the machine you examined earlier. 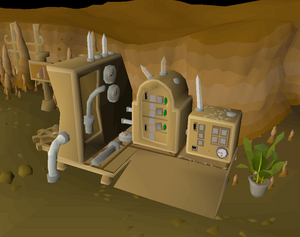 You'll need to repair this

Crush your mud rune with the pestle and mortar, and then use it on the bucket of sap to create magic glue. Repair the machine using your maple logs, oak logs and the glue. You will need to have a hammer and a saw in your inventory.

Note: If you did not bring a bucket of sap ahead of time, there is a tree just north of Brimstail's cave, between two Oak trees, that you can extract sap from. Use a knife on it with a bucket in your inventory to extract the sap.

Now, you will have to unlock and restart the machine. For this, you will need more crystal disks—talk to Brimstail to get some from him. You can talk to him multiple times to get more shapes. If you can no longer get disks from Brimstail, drop the disks and talk to him again to get more disks. Alternatively, you can exchange the disks at the exchanger next to the machine.

To work this machine, you have to fit crystal disks to the numbers shown. The numbers will be different for everybody; therefore, you have to solve this mostly yourself. This is how it works:

To the west side is a chart showing the values of each colour.

The crystal is equal to:

This value is multiplied by the number of sides each crystal has:

Some of the colours can be easily mixed up, since they are very similar (e.g. blue, indigo and violet). Hover them with your mouse to be sure.

Note: the yellow circle can never be obtained. If the puzzle requires a value of three, you must use the red triangle instead.

There is a token exchanger on the right-hand side, which allows you to insert various tokens and change them for others of the same value. You cannot exchange more than 35 points worth at a time, but you may exchange a single token for many other lower valued tokens if its value is high enough. You will always receive the same value back, in different tokens. For example, if you need an indigo pentagon (30), and have a violet pentagon (35). Put the violet pentagon into the exchanger, and keep declining the transaction until the machine offers you an indigo pentagon (30) and a red pentagon (5). 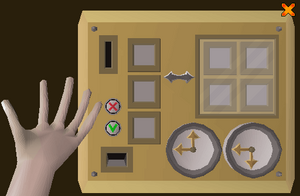 To unlock the machine, you have to create a single disk worth the number of points shown on Oaknock's machine. The numbers are different for everyone. As a general strategy, try and get the smaller numbers and it's easier. Any violet pentagons or similar if not needed may be exchanged for ones of a lower value using the Oaknock's exchanger.

Once unlocked, you need to restart the machine. For this, you will need to fit six separate tokens to three different numbers (1 for the first number, 2 for the second and 3 for the third). Be patient—it can take a while to get all the tokens that you need. You may speak to Brimstail to get more tokens which may make getting the ones you want easier.

An example of a completed machine. Note that all the slots need to be filled. In this example, using two violet triangles turned the light green, but still did not work. If this happens, you can just use the exchanger to turn it into two pieces, since the total points stay the same.

Once you have unlocked the machine, a cutscene ensues in which you inform an overjoyed Brimstail of your success. At that point, however, Izzie mysteriously transforms into an evil creature. Talk to Brimstail, he says that when Izzie was a cute creature, he wandered into Brimstail's cave one day and decided to keep it as a pet because as it was friendly, after which it would always watch him research. You deduce that the 'cute' creatures are Arposandran spies despatched around the Stronghold to gather information for Glouphrie. After the cut-scene, talk to Brimstail and he will tell you to inform King Narnode and get rid of the evil spies. 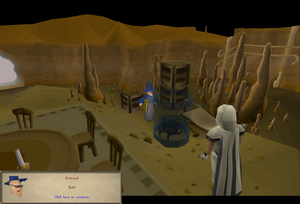 Speak to King Narnode inside the Grand Tree. You briefly summarise the situation, to his outrage. He tasks you with killing all of the spies summarily. There are six creatures in total, and they have 1 Hitpoint each.

Note: If Brimstail kills the evil creature, or if you mess up a creature kill count at any time, the last Evil Creature will spawn at the entrance to Gnome Stronghold.

Talk to King Narnode, and he will reward you. 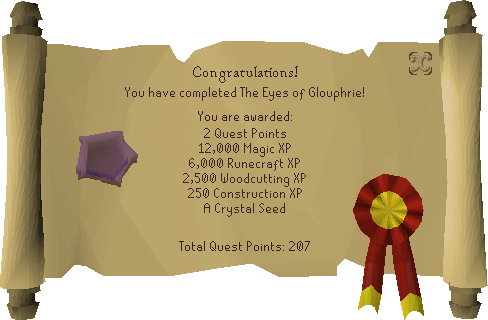 Completion of The Eyes of Glouphrie is required for the following: 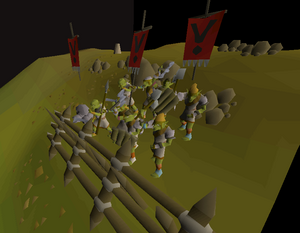 The goblin army seen during the quest from the western side of the Burthorpe Games Room.
Retrieved from ‘https://oldschool.runescape.wiki/w/The_Eyes_of_Glouphrie?oldid=14327742’
Categories:
Hidden categories: